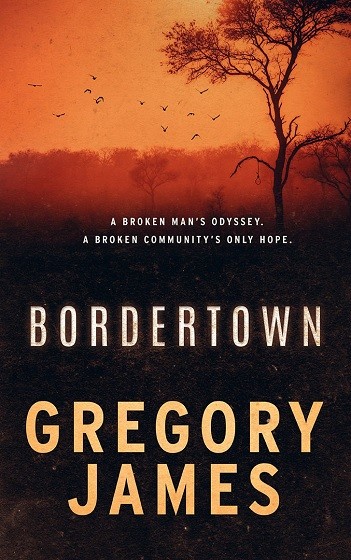 Recently a lot of books have passed my way that have, as their central theme, white Australians’ mistreatment of Aboriginal Australians. This is, in my humble opinion, not a bad thing. In the case of Bordertown, however, it’s not a book that is written from an Aboriginal perspective, rather it’s the viewpoint of a white outsider Policeman sent to an outback posting after a disastrous shooting in Sydney, in the early 1980’s. There central character, Detective Bo Campbell, comes across shocking abuse, murder and mistreatment of the local Aboriginal’s combined with a visceral racism and deep seated corruption.

Bordertown is not meant to be easy reading. This is difficult (uncomfortable for all Australians) subject matter and author Gregory James doesn’t pull any punches. Right from the opening scenes, dodging kangaroos on outback roads, drinking himself into despair, Bo Campbell is obviously struggling. An encounter with some pig shooters, and the way that the local police simply turn a blind eye surprises him – but it should have been a clear warning that the penance he’s about to do for an accidental shooting, will be done surrounded by violence and a disrespect for life (people and animals) that’s so matter of fact it’s breathtaking. Add to that the corruption, racism, overbearing colleagues, the general feeling of menace about the place and you’d forgive Campbell for sinking further into alcohol and avoidance. But he’s shaken to the core when told to ignore the murder of a local Aboriginal woman, shattered when he realises the depth of the cover-up, and determined to do something about it even at risk of his own personal safety.

There are aspects of the plot here that may feel like they require a bit of hard swallowing. You’d hope it’s a little unbelievable that so many women could go missing, that a mysterious property in the middle of nowhere could exist like it does, and that corruption would be so entrenched in all levels of the police force and authorities, but then again you look at the levels of government corruption, cronyism and the rise of racism, sexism, vicious attacks, domestic violence and extremism in current day Australia and perhaps it’s not such a big swallow after all.

For this reader, there was so much about Bordertown that made me feel profoundly distressed. Whilst on one level Bordertown is a flat out police procedural, packed to the gills with action. Set as it is, in the early 1980’s in outback Australia, it’s not over-burdened by procedures, forensics or rules. On another level it’s a lot more about the way that we’ve been all too keen to shove the past mistreatment of people into the “well that was then” basket.

I’ve said it before and I’ll say it again, crime fiction in any guise is good at casting some very strong light into the darkest corners of human history and Bordertown has the spotlights turned up as high as they will go.