A filmography featuring Dumb and Dumber To and Shallow Hal doesn’t exactly scream Oscar. Yet director Peter Farrelly finds himself as an Oscar frontrunner for his crowd-pleasing film Green Book. This conventional take on race relations in the American South of the 1960s seems to be carefully designed to push the right buttons.

Of all the movies vying for Oscars this year, Green Book is definitely the most “traditional”. It’s almost an exercise in “Screenwriting 101” as it dutifully ticks off the tropes of “Oscar-bait”movies. Indeed, its echoes of multi-Oscar winner Driving Miss Daisy are unmistakable. But for all its conventionality, it works. At the preview I attended, the audience were enthralled – laughing and tearing up in all the right places. That surely is the ultimate proof a movie has gripped its audience. 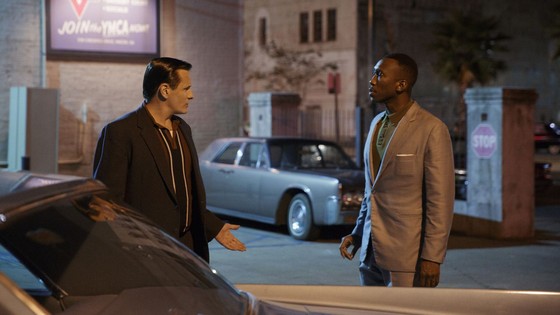 The film takes place over the (northern) autumn of 1962. The Civil Rights Act is still years away. In the American South, Jim Crow laws – and attitudes – hold a tight rein on society. In this atmosphere, a New York record company decides its star Dr Don Shirley (Mahershala Ali) should head out on a tour taking in the South. Wisely, they also decide Dr Shirley – a cultured piano virtuoso – requires a little “protection” on this long trip. As luck would have it, bouncer Tony Vellalonga (Viggo Mortensen) – a.k.a. Tony Lip – is at a loose end. His regular gig at the Copacabana is on hiatus since the venue is closed for renovations.

Despite initial reluctance (perhaps stemming from his own racism), Tony eventually agrees when Dr Shirley accedes to Tony’s demands regarding his salary and conditions. But the job will involve Tony spending two months away from his wife Dolores (Linda Cardinelli) and young sons. Accompanied by cellist Oleg (Dimiter D. Marinov) and bassist George (Mike Hatton), Tony and Dr Shirley hit the road. Before they leave, Tony receives a copy of the Green Book, a guide for African-American motorists. While things go relatively smoothly at first, their arrival in the Deep South soon throws up challenges for both men.

Despite its rather predictable story arc, Green Book explores some interesting ideas. In particular, the script (by Farrelly, Brian Currie and Nick Vellalonga) deftly navigates the intersection of race and class in the American consciousness in a way I found unexpected. It also doesn’t make a saint of either Shirley or Vellalonga; and mostly avoids a “preachy” tone in its dealing with racism. Yes, the ending is pretty schmaltzy and the film never really pulls a big surprise; but neither of those things really upset me greatly. It also features a lot of humour – subdued humour, but humour all the same.

However Farrelly oddly doesn’t explain the role of the Green Book (yes, it was a real thing) very well, or go into its significance. If you want more on that, I recommend checking out podcasts from The Memory Palace and 99% Invisible, which explain things a lot more clearly. Also, Don Shirley’s musical prowess is rather overshadowed for much of the film, though Kris Bowers’ score is a nice accompaniment. Sean Porter’s luminous cinematography is a highlight.

Viggo Mortensen (Captain Fantastic) and Mahershala Ali (Moonlight) both give wonderful performances in the central roles. While either character could have ended up a stereotype, both actors bring enough nuance to avoid that outcome, even if Mortensen comes perilously close on occasion. Linda Cardinelli (A Simple Favour) is good in a limited role as the dutiful Dolores; while Dimiter D. Marinov and Mike Hatton are both fine as the other members of the Don Shirley Trio.

Although Green Book isn’t going to win any prizes for originality, this reassuringly “familiar” movie carries an important message. But perhaps more tellingly, Farrelly highlights those significant issues in a way that audiences can – and will – relate to.