Paul Feig steps away from broad comedy and onto the darker side with A Simple Favour. This pulpy thriller certainly has Feig’s fingerprints on it, but it’s easily his most expressive film in ages – maybe ever.

Of course, the film invites comparisons with the David Fincher’s wonderful Gone Girl. But A Simple Favour is far more mired in the cheap thrills of a Raymond Chandler novel than in psychological machinations (like, say, Hitchcock’s Vertigo). 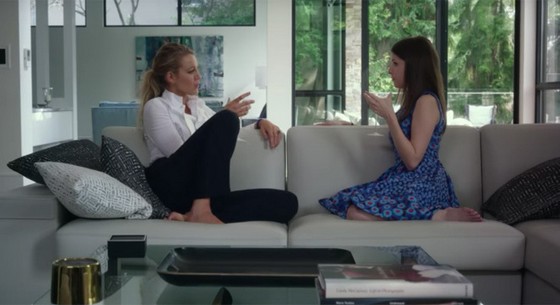 Stephanie Smothers (Anna Kendrick) is a single mother caring for her young son. Her husband has died and she’s living off the insurance money. To supplement her income, she runs a “mommy vlog” – a YouTube channel in which she shares recipes and craft tips. That is until she encounters Emily Nelson (Blake Lively), a high-powered publicist with a job at a fashion house. Emily’s son goes to the same school, and the boys insist on a play-date. They soon arrive at Emily’s amazing designer home. Emily fixes a stiff drink and before long the two mothers are bonding. When Emily’s husband Sean Townsend (Henry Golding) arrives home, things take a slightly odd turn.

But soon Stephanie and Emily are close – at least, as close as Emily will allow. Then Emily asks a favour – could Stephanie pick up her child from school. She does; but as the hours turn to days with no sign of Emily, Stephanie begins to fear the worst.

Feig isn’t known for doing things by halves. A Simple Favour isn’t just schlocky – it deliberates wallows in its schlock.  As the twists mount up, they become more and more over-the-top (which is kind of the point). Some of them are predictable, but others have real shock value. Feig and screenwriter Jessica Sharzer tread a fine line between tension and comedy. They keep the soapier elements in check while revelling in some cracking dialogue and complex plotting.

Two brilliant performance keep A Simple Favour from sliding into pure soap opera territory. Anna Kendrick puts in arguably her finest work since Up in the Air as Stephanie. Sharzer’s script gives her lots to work with as her character goes from dupe to femme fatale to double-crosser. It’s a neat subversion of noir tropes, but Kendrick’s performance makes it work. Blake Lively becomes Kendrick’s doppelganger in a way. She starts as the femme fatale before the ground shifts under her character. Her steely delivery gives the film an edge. Henry Golding plays Sean as an affable naif, though his character too gets room to breathe later in the piece.

While the three central performances are critical, many of the supporting cast are just as great. They include Bashir Salahuddin as a wise-cracking cop and Rupert Friend as Emily’s haughty boss.

You might call A Simple Favour a guilty pleasure, but there’s really nothing to be guilty about. It’s a pedal-to-the-metal ride that Feig carefully steers between thriller and comedy. The fact that the performances are so good only adds to its sheen.