The first thing that came to my mind while watching Apostle, was the movie The Witch. It takes place in the same time period. Here, too, an old-fashioned sounding English is spoken. And it’s also a religion-tinted theme. The biggest difference with The Witch is that I thought that one was rather boring and not a horror at all. It was more a historical costume drama. Apostle is, on the other hand, simply sublime. A mysterious film about religious madness. Not only content wise but also visually it all looks perfect And the facet of horror was indeed present. And no, not only because of the bloody and gore scenes. There’s only one thing that puzzled me afterward. What was it that the people of Erisden worshiped? 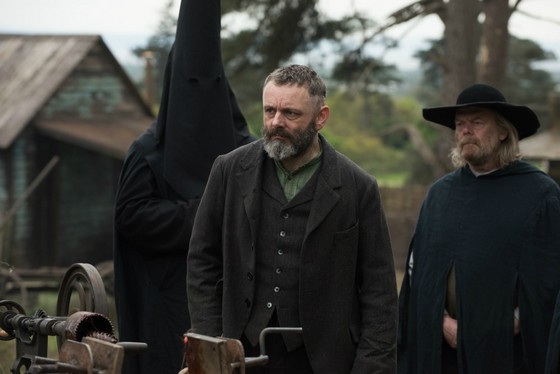 It all starts when Thomas Richardson (Dan Stevens) is asked by his father to rescue his sister Jennifer (Elen Rhys) from the grasp of an obscure sect. She’s kidnapped. And a large ransom is demanded. Thomas himself was once a sort of missionary spreading God’s word in the land of the rising sun. His experiences there, however, made sure that he got an aversion to everything that has to do with religion. Without further delay, he takes on the assignment to save his sister from the gang of fanatics and bring her back home.

The running time of Apostle is two hours. Perhaps this is too much of a good thing for a horror with religion as a central topic. But believe me. Those two hours are over before you know it. Every sense of time is absent when viewing this captivating film. And this because of the excellent way of build up. The first hour you’ll be carried away in the enigmatic life on the island of Erisden. Beautiful images are interspersed with scenes from the daily life of this primitive living commune. Soon it’s clear that this sect developed a peculiar kind of faith with their own rituals (and despotic rules). Just as in any religion, a limited number of individuals rule and decide how to behave in this community. They are also the only ones who know what’s going on there.

The reason why they abducted the daughter of a rich man is that their provisions are drastically reduced due to bad harvests and they are gradually heading towards a shortage of food. Prophet Malcolm (Michael Sheen) tries to turn the tide in a certain way but finally, he has to realize that he’s helplessly watching how his patiently built community gradually crumbles. Despite the sometimes rather barbaric punishments that have been introduced to keep the community under control, Malcolm seems to be a peaceful man who’s worried about the welfare of the islanders. More peaceful than some of his confidants who show a certain hunger for power and who, if the opportunity presents itself, try to claim leadership without delay.

The characters Thomas and Malcolm are played in a brilliant way by Dan Stevens and Michael Sheen. Malcolm isn’t really a cruel despot, though he’s the driving force behind the terrible process of cleansing. And even though Thomas has to be careful while tracking down his sister, he immediately disobeys imposed rules and expresses his doubts about Malcolm towards the prophet’s daughter. Michael Sheen (who played a more funny role in Passengers as the robotic butler Arthur) and Dan Stevens were perfectly cast. I especially liked Dan Stevens (Beauty and the Beast). Even though his grim and furious look started to get boring at a certain moment. There are also a few other characters that are worth mentioning. First, there are Bill Milner and Kristine Froseth who take care of the idyllic part. Then there’s Lucy Boynton as Andrea, the daughter of the Prophet. It’s not the most important role, but her appearance is in sharp contrast with the rest of the film. A dazzling beauty with a refreshing look. She looks like a fragile porcelain doll. And finally Mark Lewis Jones as Quinn, co-founder of this sect and in hindsight also a fanatic. Each and every one was an interesting character.

Apostle is certainly not for sensitive viewers. Not that it ‘s really frightening (except maybe for the sewer scene). But there are some distasteful scenes that can be quite shocking for some. Especially in the second part of the film. It’s filled with sadistic torture practices where the accompanying sounds cause chills. This in contrast to the first part that you can call atmospheric. It’s difficult to label this movie with a specific film genre. But do you like a bit of suspense? A tad of horror? And pagan religious scenes? Well then, this folk-horror movie is definitely your thing. At least one of the better Netflix productions so far.

Apostle is now streaming on Netflix.