The terms “medically induced coma” and “charming rom-com” may not seem an ideal fit, but that’s exactly what happens in The Big Sick. Kumail Nanjiani’s (literal) labour of love is one of the more original and engaging romances of recent years. 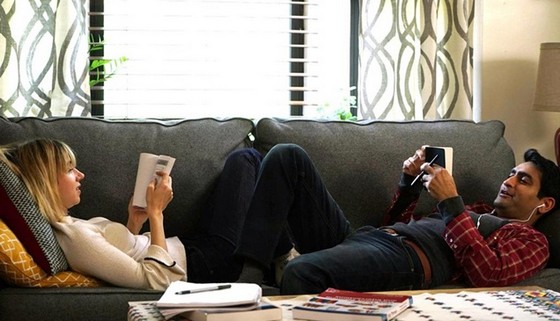 You might recognise Nanjiani from TV’s Silicon Valley. He’s also appeared in smaller parts in several movies, but The Big Sick is a chance for him to break out of that mould. He grabs that opportunity with both hands. He proves both an adept screenwriter and a very modern leading man. Nanjiani wrote the screenplay with real-life wife Emily V. Gordon, but Michael Showalter (who’s also known as a screenwriter) directs.

The basic story of The Big Sick is the story of Nanjiani and Gordon’s early time as a couple. Kumail (Nanjiani) and his friends are slogging it out in Chicago’s stand-up scene. Comedy though doesn’t pay that well, so Kumail also works as an Uber driver. While his comedy career is on the up, he’s under pressure from his family. His mother Sharmeen (Zenobia Shroff) wants him to settle down with a “nice Pakistani girl” in an arranged marriage. To that end, she invites a stream of eligible young Pakistani ladies to “drop by” at family dinners. But Kumail meets Emily (Zöe Kazan) at a gig, and it’s love at first sight. As with all new relationships though, theirs has a few bumps along the way. While navigating one of these “bumps”, Emily comes down with a mysterious illness. The doctors place her in an induced coma while they try to work it out. Meanwhile, Emily’s frantic parents Beth (Holly Hunter) and Terry (Ray Romano) arrive to be at their daughter’s side.

The Big Sick blends Nanjiani’s stand-up comedy with his real-life story. The result is utterly charming. Knowing it’s a comedy going in helps of course (particularly through some of the hospital scenes). But you’re virtually guaranteed to be walking out with a smile on your face.

Judd Apatow gets a producer credit here, and you can see his fingerprints on the “glass” of the film. The blend of comedy with the harshness of everyday life is one. The 2-hour running time is another. But where some of Apatow’s own recent efforts have dragged somewhat, this feels light on its feet. Perhaps that’s because the film cuts frequently between three relationships. There’s Kumail and Emily of course; but also Kumail and his family, and then Kumail and Emily’s parents. It particularly liked the way the film almost imperceptibly developed the bond between Kumail and Terry.

Nanjiani’s easy charm and slightly dorky demeanour are key to the film’s success. His comic timing is also impeccable. Zöe Kazan has a rather thankless task as Emily, but still brings an infectious energy to the role. Ray Romano basically steals the third act as Terry. Zenobia Shroff and Holly Hunter also have some fine moments as the respective mothers.

The Big Sick is the kind of movie that all your friends will want to see. Listen to them.