The Tick is a show I love a bit too much. I don’t know why exactly, but I enjoy it more enthusiastically than I perhaps should. Maybe it’s the fact that this light-hearted series plays with the tropes of the superhero genre in a Deadpool-like way. Or maybe it’s the assured writing and direction. Or maybe it’s just so silly, I can’t help but like it. 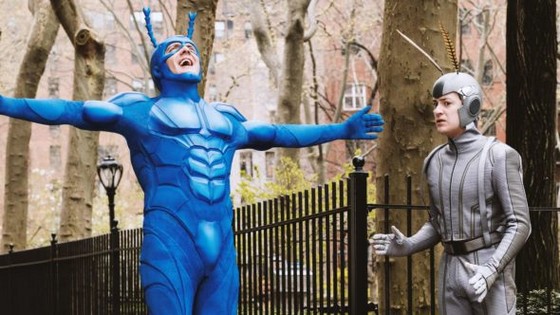 In the world of The Tick, superheroes are very real; and so are their nemeses, super-villains. Mild-mannered office clerk Arthur Everest (Griffin Newman) carries the trauma caused by one of these super-villains, The Terror (Jackie Earle Haley). Arthur’s father died as a direct result of The Terror’s reign of, well, terror while Arthur was a boy. But those days are past and virtually everyone believes The Terror is dead, defeated by superhero Superian (Brendan Hines). But Arthur discovers evidence suggesting The Terror is not only still alive, but secretly running the city’s underworld.

His obsession with the super-villain however harms his career and impacts his personal life. His well-meaning sister Dot (Valorie Curry), a paramedic, worries about him. But everything changes when Arthur discovers crime lord Ramses (Michael Cerveris) meeting with Miss Lint (Yara Martinez) – The Terror’s former protege – to deliver a mysterious package. While spying on the crooks, Arthur encounters the Tick (Peter Serafinowicz). The Tick is single-minded in his pursuit of justice; but not terribly smart. Events spiral out of control and Arthur is arrested. But the next day, the Tick is back in Arthur’s apartment with the package. It turns out to be a superhero suit. And the Tick is adamant Arthur has to put it on if he ever wants to hunt down The Terror.

The Tick seems to be something of an addiction for series creator Ben Edlund. He previously produced both animated (1994 – 1997) and live action (2001 – 2002) versions of the story. But with today’s advanced CGI, he’s back for another go-round. The show’s subversive sensibility probably works better now than it did previously. Perhaps Edlund’s work on the ultra-serious Gotham made him want to re-visit this somewhat lighter material.

Edlund employs a team of directors; yet despite many of them only directing a couple of episodes, the look and feel of the show remains consistent. Some of the effects are impressive (Arthur’s attempts to tame the superhero suit are a highlight) and the costumes are suitably silly. But there’s some depth here. As an example, Arthur’s struggles with his mental health in the early episodes are grounded in the reality of past trauma. Although obviously you’re not going to watch The Tick for its insight into the human condition, the show provides more than just superhero hijinks.

Griffin Newman provides the bedrock of the series as the nervy Arthur. Valorie Curry provides his counterpoint as the no-nonsense Dot. Both provide the kind of grounded performances necessary to keep the show from spinning out of control. But this series is all about the “supers”. Peter Serafinowicz, in the title role, bears an eerie similarity to Patrick Warburton, who was the Tick in the 2001 series. But his happy-go-lucky demeanour suits the character perfectly. Jackie Earle Haley is suitably scary as The Terror; while Michael Cerveris adds colour as the slightly insane Ramses.

If you’re after deep psychological drama, The Tick is not for you. If however you’re after a diverting show that’s actually a lot of fun, you should give it a go.

Season 1 of The Tick is streaming on Amazon Prime now; with season 2 expected later this year.