One of the more buzzy features on the festival circuit last year was The Sound of Silence, the debut feature from Michael Tyburski. Within the film’s high concept however lurks a story of genuine heart.

Tyburski and co-writer Ben Nabors expand their 2013 short Palimpsest into a feature film (even then short-ish at 85 minutes). The film delves into the mundane realities of modern life in an interesting way. But that’s really just the pretext to an exploration of connection. You may have heard the truism that we’re more connected than ever (via social media) but that comes at the cost of actual human connection. The Sound of Silence seeks out both. 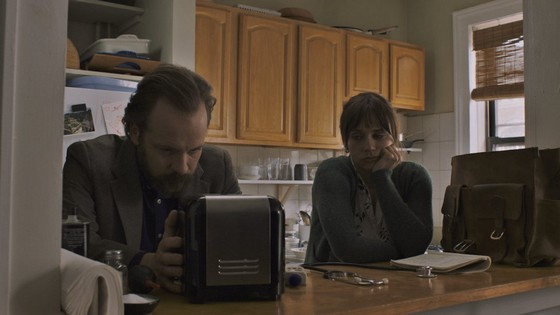 Peter Lucian (Peter Sarsgaard) is a “house tuner” in New York. His work involves helping clients to “tune” their houses to the optimum “frequency” for their lives. Not sleeping well? Maybe your toaster is pitched at the wrong frequency. Ditch it and get a new one to restore your sleep cycle. Sounds crazy right? But Peter is quite successful and has helped many clients. He’s a perfectionist, obsessed with the fine details of his craft. But when he encounters anew client, Ellen Chasen (Rashida Jones), his self-view is challenged. Peter’s initial sonic prescription doesn’t “fix” Ellen’s problems. His lack of success causes Ellen to question his methods – and his sanity. Meanwhile, Peter seeks academic credibility at the urging of Columbia professor Robert Feinway (Austin Pendleton). He sets out to meticulously catalogue his findings with the help of assistant Samuel Diaz (Tony Revolori). But Samuel may not be as loyal as he appears.

The Sound of Silence carefully examines its central character. I don’t think it’s a big stretch to suggest that, in different circumstances, Peter Lucian might have become Travis Bickle. The film exposes his obsessions (notably in one crushing scene) and his corresponding disinterest in the outside world. It’s at its best when it peers into Peter’s soul. But it loses focus, particularly in the second act, when the academic game-playing takes over. Its opening section, which shows Peter at work trying to “tune” apartments, is fascinating; and the finale is terrific. But the “sag” in the middle lets the film down.

Tyburski brings many things to the table here, but pace isn’t one of them. The Sound of Silence unfolds, well, languidly. If you’re used to slow art-house cinema, you may get into its particular groove. If you’re more used to action thrillers, this may seem unbearable slow. I think it works for the subject-matter, but I have a liking for slow movies.

Peter Sarsgaard (Jackie) is brilliant as the buttoned-down “house tuner”. His performance alone makes the movie worth watching. Sarsgaard brings great nuance to the role. He elegantly conveys Lucian’s suppressed emotions, allowing them to bubble to the surface as the story demands. Rashida Jones (Tag) is under-utilised but still makes an impression as Ellen. Tony Revolori (Spider-Man: Far From Home) gets a small but interesting role as Samuel. And look out too for Bruce Altman (Fifty Shades Freed) in a neat cameo.

The Sound of Silence definitely won’t be for all tastes. This is a niche art-house experience; and you probably have a pretty good idea whether that’s for you or not. But if you can go with it, then despite some flaws, it’s well worth staying with this film to the very end.

The Sound of Silence is available to rent or buy on Apple TV, YouTube and Google Play