Kenya Barris is probably the most popular TV producer you’ve never heard of. Barris made his name as a writer and producer on America’s Next Top Model. He followed that up with his “-ish” series – Black-ish, Mixed-ish and Grown-ish. Now he steps in front of the camera for probably the most meta show of 2020, #BlackAF.

See, Barris is a hugely successful TV producer who’s married with six kids. In #BlackAF, he plays a hugely successful TV producer – named Kenya Barris – who’s married with six kids. Yep, that’s about as meta as it gets. How “real” the character is to Barris himself is a matter of conjecture. My guess is that the show’s Kenya Barris is an exaggerated version of the real person. 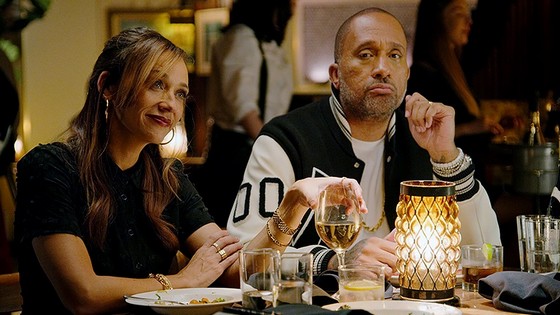 #BlackAF plays a bit like a blend of Modern Family, Veep and Ballers – if that makes any sense. Barris (wearing his creator’s hat) structures the show as a video essay being filmed by his daughter Drea (Iman Benson) for her New York Film School application. Drea’s camera follows the family through a series of (mis)adventures in their personal and professional lives; intercut with “didactics” from Drea to put it all in context of a wider narrative about the black experience. Much of the drama derives from the fractious dynamic between Barris and his wife Joya (Rashida Jones). Although they seem happy together, they’re constantly at each other’s throats. The kids range from the retiring Pops (Justin Claiborne) to the wild Chloe (Genneya Walton).

Barris has some interesting things to say about success, money, family and being black in America. The problem is a script that occasionally can’t get out of its own way. Barris has his characters bicker – a lot. The bickering sometimes gets in the way of what’s the show is trying to say. As a result, it felt sluggish at times, with characters fighting endlessly to no real point. But when it gets things right (like the Juneteenth party scene), #BlackAF can be a delight.

Although I mentioned Modern Family, don’t think this is suitable for a “family” audience. The show contains a lot of swearing; and drugs, alcohol and sex appear regularly. Ironically though, perhaps the most offensive aspect of the show is its depiction of conspicuous consumption. I know that aspect probably plays differently in the US, but for me it felt far more “wrong” than any profanity.

I question Barris’ choice to play himself in the show. While it lends a certain reflexive charm, his acting experience is limited so he comes off a little stilted at times. In addition, playing opposite the experienced – and wonderful – Rashida Jones (The Sound of Silence) only accentuates their differences. Jones pretty much carries the show (and gets top billing) even though it’s plainly a passion project for Barris. The other “adult” in the cast is Gil Ozeri, who has some great moments as Barris’s put-upon assistant Danny. Among the kids, Iman Benson stands out as Drea. Her dry wit and comic timing counterpoint the sometimes clueless adults nicely.

Despite some reservations, I ended up enjoying #BlackAF. While it’s clearly made with an American audience in mind, enough of it translates here to make it worth a look, even a binge-watch if you’re keen.

#BlackAF is now streaming on Netflix