A man writes a 17,000 page report. Sound good? Maybe that potted summary doesn’t really sell it; but Scott Z. Burns’ docu-fiction about US torture during the euphemistically-named “war on terror” is a fascinating if slow-moving lesson on the dangers of unbounded power. 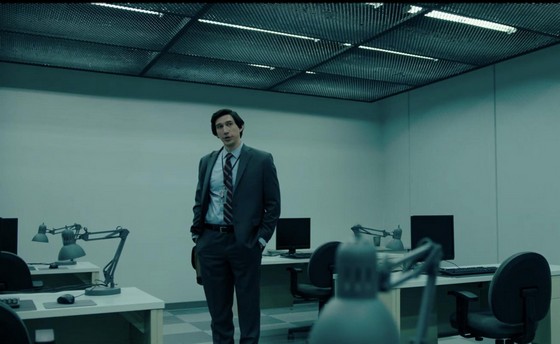 Burns is possibly better-known as a writer, particularly for his collaborations with Steven Soderbergh like Side Effects and Contagion. He once again fires up the laptop for the screenplay to this film. And while it’s very detailed, Burns doesn’t lose slight of the narrative through-line.

The Report follows Daniel Jones (Adam Driver), an investigator appointed to lead a congressional inquiry into the CIA’s so-called “enhanced interrogation techniques”. That leads him into the shadowy world of CIA operations in Afghanistan, Iraq and elsewhere that led to suspects being held without charge or trial in “black sites”. There, they were subjected to all manner of horrors in the name of extracting “actionable intelligence” on terrorist operations. In reality, the operations were ineffective and dangerous, and breached both US and international law.

Along the way to uncovering the truth, Jones encounters obstacles ranging from simple incompetence through to physical threats (and, in one case, actual violence). But his dogged pursuit of the case wins him both friends and enemies. The fact the investigation snowballs into something far bigger than the seemingly simple original brief is a source of frustration. But Jones also encounters frustration with the cautious approach adopted by his ally and nominal boss Sen. Dianne Feinstein (Annette Bening).

The Report isn’t so much a sprawling epic as a meticulous examination – much like the investigation it chronicles. And it holds lessons for the present. Politicians around the world sometimes make snap judgments without proper consideration of where those judgments might lead. Burns posits that cool thinking is less likely to lead to the kind of horrific mistakes the film exposes. And if you want more background to the story and some of the characters, you should check out the Amazon series The Looming Tower. It puts a lot of context around this film. And you might notice some of the characters also made appearances in the recent Vice.

In the opening credits, the words “The Torture Report” appear, before the middle word is erased to give the film’s title. So it shouldn’t come as a great surprise to learn the film depicts a fair bit of torture. It’s brutal and harrowing – so be warned. That confronting brutality contrasts with Jones’ painstaking efforts to uncover the real story.

Adam Driver (The Dead Don’t Die) is excellent in the central role. It’s a role that demands an understated determination, and Driver certainly delivers. His versatility is very much on show at the moment, and this is another feather in his acting cap. The only trouble is that the film concentrates so hard on Jones, the other characters tend to flit through the film. Annette Bening really channels the real-life senator. Feinstein’s Republican counterpart, the late Sen. John McCain, is however only seen in video footage.

I’m guessing The Report will have a limited cinematic audience. But, as is becoming the trend, you won’t have long to wait to catch it in your home; it’ll be streaming on Amazon Prime from 29 November 2019. Either way, it’s a film with a powerful message that’s well worth catching.