Jim Jarmusch is like a cinematic magpie. His filmography includes a Western (Dead Man), a samurai movie (Ghost Dog), a rock doco (Year of the Horse) and a vampire movie (Only Lovers Left Alive). So what does the director who’s done just about everything do next? Why a zombie movie of course! And The Dead Don’t Die is unlike any zombie movie you’ve seen before. 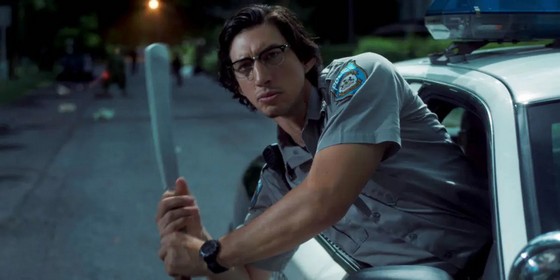 As a genre, zombie movies are surprisingly versatile. You’ve got your “straight” zombie-horror; but we’ve also had romance-zombies (Warm Bodies), comedy-zombies (Shaun of the Dead), and police-zombies (iZombie). Disney Channel even has a teen-zombie movie (predictably titled Zombies). So finding something original to add to the genre is a big ask; but Jarmusch is nothing if not original.

The Dead Don’t Die is a loony rollercoaster ride through the zombie apocalypse. Complete with typical Jarmusch digressions and surreal plot twists, the film eschews the standard trope of zombies as a form of contagion. Instead, Jarmusch uses the undead as a metaphor for rampant consumerism. And in case you don’t pick up on that, one of the characters helpfully explains it.

The time is the present. The place is the town of Centerville, somewhere in the USA. Police Chief Cliff Robertson (Bill Murray) notices strange events affecting his community. Daylight is all out of whack, animals are disappearing and townsfolk are on edge. Could if have something to do with “polar fracking”? Has the Earth been knocked off its axis? Cliff’s deputy Officer Ronnie Peterson (Adam Driver) thinks it’s all going to end badly. But when night eventually falls, something truly frightening. The dead begin to rise from the local cemetery. The first attack seems like it could just be an awful crime. But soon zombies are launching a full-scale invasion of the town.

The Dead Don’t Die is a lot more fun than Only Lovers Left Alive. It still has Jarmusch’s trademark deadpan style, but doesn’t take itself too seriously. Early on, one character explains that a song heard on a car radio is familiar because “it’s the theme song”. These kinds of meta moments, combined with some hilarious casting choices (Iggy Pop as the original zombie, for example) and truly bizarre plot elements combine to make this one of Jarmusch’s most accessible films to date.

Bill Murray leads an big-name cast with his usual wry humour, which is perfectly suited to the material. Adam Driver seems to channel a younger Murray as Peterson; while Chloe Sevigny also has some excellent moments as Officer Mindy Morrison. Steve Buscemi has a lot of fun as the bigoted Farmer Frank Miller; while Tilda Swinton really leans into the bizarre undertaker/ninja Zelda Winston. Carol Kane, Danny Glover and pop princess Selina Gomez all turn up in smaller roles. And Jarmusch regular Tom Waits acts as the film’s Greek chorus as Hermit Bob.

Even though it’s completely bonkers, I thoroughly enjoyed The Dead Don’t Die. Even more importantly though, through all the madness, Jarmusch actually has something to say about the state of the world.