First up, an admission. Despite its fine pedigree, I was quietly dreading the prospect of seeing Ford v Ferrari. I figured the movie would be a drawn out against-the-odds motor racing story. But I need not have worried because it turned out to be pretty darn good, although I felt it was a tad long. 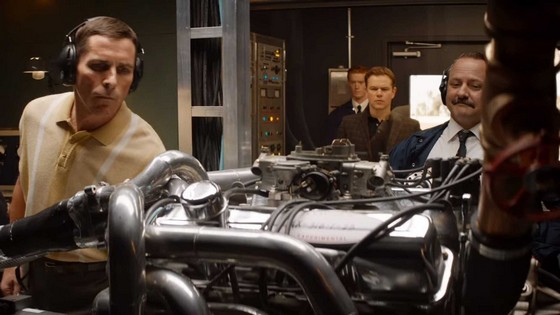 Ford v Ferrari was inspired by a friendship that changed motor racing history. In 1959, Carroll Shelby (Matt Damon) is on top of the world after winning the most difficult race in all motor sports, the 24-hour race at Le Mans. But his greatest triumph is quickly followed by a crushing blow. The fearless Texan is told by doctors that a grave heart condition will prevent him from ever racing again. Shelby reinvents himself as a car designer and salesman working out of a warehouse space in Venice Beach with a team of engineers and mechanics – including  hot-tempered test driver Ken Miles (Christian Bale).

A champion British race car driver and a devoted family man, Miles is brilliant behind the wheel, but he’s also blunt, arrogant and unwilling to compromise. After Shelby vehicles make a strong showing at Le Mans against Italy’s venerable Enzo Ferrari, Ford Motor Company recruits the firebrand visionary to design the ultimate race car – a machine that could beat even Ferrari on the unforgiving French track. Shelby, Miles and their ragtag crew battle corporate interference, the laws of physics and their own personal demons to develop a revolutionary vehicle that will outshine every competitor. But their tireless efforts take a toll and victory comes at a price.

The two leads are fine exponents of their craft. Both play headstrong characters, although one has far more diplomacy than the other. The film is built around passion and commitment. With it comes drama and pathos … and no shortage of good humour. The secondary players are also strong and varied, representing different, well drawn – if largely one-dimensional – characters. They include Henry Ford II (Tracy Letts) and his 2IC, Leo Beebe (Josh Lucas) and main marketing man Lee Iacocca (Jon Bernthal). Equally strong are Shelby’s right hand man, Phil Remington (Ray McKinnon) and Miles’ no-nonsense but supportive wife, Mollie (Caitriona Balfe) and their doting son, Peter (Noah Jupe).

Much is, indeed, built on what a monumental task Ford and its newly formed racing team have to knock off the heavyweights, but it’s done with style and substance.