Sleeper agents hold a weird fascination. When one is uncovered, the media seem intrigued. But of course the reality of someone playing a “long game” of espionage is often far more prosaic than sensational headlines would suggest. That reality fuels Trevor Nunn’s stagy drama, Red Joan.

Lindsay Shapero wrote the original screenplay, basing it loosely on the life of Melita Norwood. She was a civil servant who – like the protagonist here – worked on Britain’s atomic bomb program during World War II. Norwood passed on atomic secrets to the USSR, hastening the Russians acquiring a nuclear arsenal. But critically, Shapero changes the protagonist’s motivation. Norwood was very clear on why she did it, and her reasons are on record. Here though, Joan has a much fuzzier motive, which strains credibility. Shapero oddly also drains her of agency. 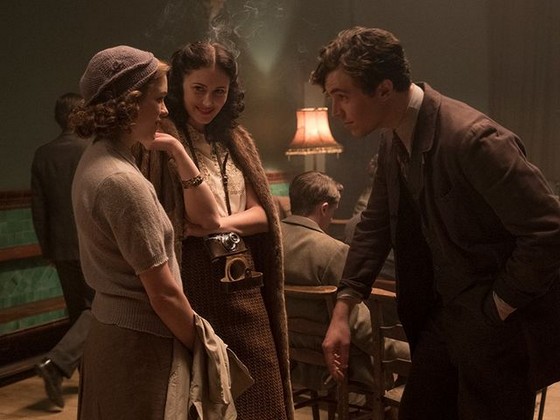 At the start of the film police arrest a frail Joan Stanley (Judi Dench). Her son Nick (Ben Miles), a barrister, comes to her aid. But while Joan refuses to cooperate, the police have built a compelling case. It goes back to before the war when Joan (played by Sophie Cookson in flashback) was a student. At university, she falls under the spell of handsome emigre Leo Galich (Tom Hughes). A committed but not blatant Communist, Leo introduces Joan to his circle of friends, including his sister Sonya (Tereza Srbova). As Joan becomes Leo’s lover and Sonya’s friend, the clouds of war gather. The outbreak of hostilities sees Joan, a brilliant mathematician, assigned to a seemingly dull office job. She soon realises however that her boss Max Davis (Stephen Campbell Moore) and his team are working on something of monumental significance. Leo meanwhile has become closer to the Soviet regime in Moscow. When he re-connects with Joan, his intentions aren’t entirely romantic.

Red Joan ends up as an odd mish-mash of period drama, romance and espionage. Nunn plays it all deadly straight to the point that the film feels rather dour. Even the heady pre-war days have a stodginess to them. Shapero’s script largely deals with the characters and their motivations directly, so (unlike say a Jon Le Carre thriller) the film lacks tension. No mystery needs solving. It’s all there up-front.

I found the motive ascribed to Joan far less compelling than Melita Norwood’s actual motive. Worse than that though, the film’s motive isn’t set up. It merely appears out of the blue, making Joan seem naive at best and duplicitous at worst. And the fact she seems so easily manipulated by the men in her life makes her crucial decision appear venial.

Sophie Cookson does a great job with a somewhat underwritten character as the younger Joan. While the story may lack credibility, her performance papers over at least some of the cracks. Dame Judi Dench has a far more limited role as the older Joan, but brings her trademark dignity and poise to the role. Stephen Campbell Moore – sometimes cast as a bad guy – is oddly charming as Davis; but I found Tom Hughes wooden and grating as Leo (his loose accent didn’t help).

Red Joan feels like a missed opportunity. This could have been far more, but some fuzzy screenwriting choices drain it of life. Still, as a straight-ahead British period drama, it works well enough for a Sunday afternoon at the movies.