John Krasinski – that all-round good guy from The Office (US) – never struck me as an action hero. But somehow he makes it work in Amazon Prime’s spy drama Jack Ryan (or to give it its full title: Tom Clancy’s Jack Ryan). Remember, this is a character that’s been played by Alec Baldwin (in The Hunt for Red October), Harrison Ford (Patriot Games) and Ben Affleck (The Sum of All Fears). 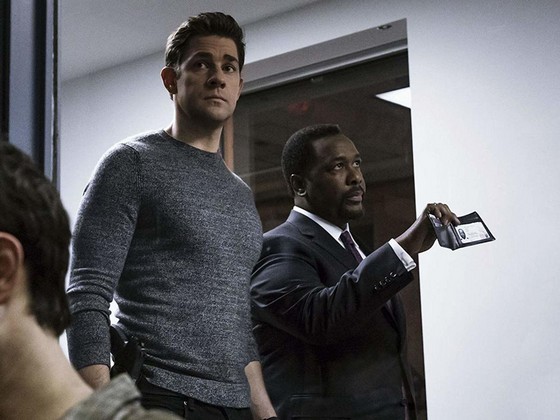 Instead of going back to the Tom Clancy novels, series creators Carlton Cuse and Graham Roland have taken Clancy’s characters and moulded a new, very contemporary story around them. Of course, in this post-9/11 world, stories of Russian submarines have diminished impact. But a story about international terrorism ticks all the boxes.

Our hero, Jack Ryan (Krasinski) is a CIA analyst. He’s good at what he does, and he enjoys the work – far more, it seems, than his past work in the military. While following a seemingly routine money trail, Ryan stumbles onto a terrorist known as Suleiman (Ali Suliman). At the same time, the Agency gets wind that Suleiman may be in Yemen. A snatch-and-grab operation sees Suleiman and his driver in custody. Given Ryan’s knowledge of Suleiman’s finances, his rather cranky new boss James Greer (Wendell Pierce) taps him to come with him to Yemen for the interrogation. But things don’t exactly go to plan, and soon Ryan and the CIA are facing a much larger threat.

What immediately struck me about Jack Ryan is how it dampens the gung-ho attitude you might expect from a show like this. Sure, it produces a number of violent set-pieces, but the series brings a lot more nuance to the topic than you might expect. You may have heard the saying “One man’s terrorist is another man’s freedom fighter”, and this series explores that dynamic. It gives almost equal time to Suleiman as it does to Ryan, showing how both men’s lives have led them to this point.

It also deftly handles some contemporary issues in international politics. In one chapter, the team have to go to France. But their French hosts aren’t exactly thrilled about working with the CIA. In another, the series highlights the refugee crisis stemming from the Syrian conflict. And it pointedly alludes to problems stemming from the current conflict in Yemen.

But unlike other spy dramas, Jack Ryan doesn’t overly complicate the plot. The focus remains consistently on the two key adversaries. The side-plots link very clearly into the main storyline, making the whole thing pretty easy to follow.

Krasinski handles both sides of his role with panache. He’s somehow equally convincing as the likeable nerd and as the no-nonsense field agent. Wendell Pierce is a great foil as the prickly Greer. Ali Suliman, like Krasinski, has to balance several sides to his character of Suleiman. He also does so with assurance. A slight disappointment is the fact that Australian Abbie Cornish doesn’t really have much to do as Ryan’s love interest, Cathy Mueller.

Jack Ryan is engaging, even enthralling, television. If you like spy dramas, this is definitely a series you should catch up with. But even if you simply like a good story well told, this is well worth your time.