I’m a sucker for a good spy drama – and Killing Eve is an exceptional spy drama. This BBC production (available here on the ABC) is a taut psychological thriller as you might expect. But its insight and its determination not to treat the viewer as an idiot are remarkable.

If any TV series is “of” the current zeitgeist, it’s Killing Eve. First, it’s based on the Villanelle novellas series by Luke Jennings. Written between 2014 and 2016, the books didn’t appear in print. They were all Kindle e-books (at least until their collection as Codename Villanelle in 2018). Phoebe Waller-Bridge (Fleabag) adapted the novellas and produced the series. 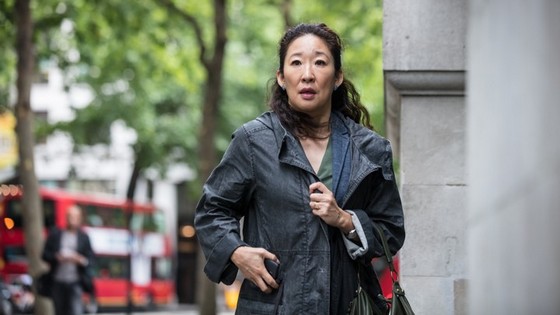 The series is a kind of anti-James Bond. The government agents working on the case are diligent but dour public servants. There’s not a martini – shaken or stirred – to be seen. In the now-famous “dinner scene” (episode 5), the dinner consists of shepherd’s pie. The assassin they’re tracking isn’t a gap-toothed thug, but a glamorous – but very dangerous – woman. Waller-Bridge seamlessly blends these unusual elements with familiar tropes of the genre to create something fresh but familiar at the same time.

The Eve of the title is Eve Polastri (Sandra Oh). She’s an MI5 officer who works in a relatively junior position under the stern gaze of the incompetent Frank Haleton (Darren Boyd). Her friend and ally Bill Pargrave (David Haig) shares her view of Frank’s abilities but doesn’t want to rock the boat. When a Russian politician is murdered – along with many others – MI5 is on alert. Eve believes the attack is the work of a killer responsible for other crimes across Europe. And she thinks the killer is a woman; something Frank dismisses.

The sole survivor of the vicious attack is in a London hospital, so Eve is assigned to protection detail. At the hospital she encounters a nurse – who turns out to be the killer Villanelle (Jodie Comer), there to tie up the loose end. When Eve is away from her station, Villanelle murders the witness and several hospital staff. Incensed, Frank fires Eve. Bill stands up for her, and is also fired. But the pair grasp a lifeline from MI5 big-wig Carolyn Martens (Fiona Shaw). She establishes a clandestine taskforce to hunt down Villanelle – with Eve and Bill running the show.

Killing Eve walks a fine line. It’s often tense and occasionally graphically violent. But Waller-Bridge introduces light touches in the form of understated humour. She also plays with some faintly bizarre moments – such as Villanelle wandering the streets of Paris with handler Konstantin (Kim Bodnia) dressed in a tutu.

At its heart though, Killing Eve is a psychological drama – a cat-and-mouse game between Eve and Villanelle. Just who is the cat and who is the mouse is often unclear.

Sandra Oh (Grey’s Anatomy) is excellent as the rather dowdy Eve. Her character’s intelligence and diligence shine through. The character has several warm moments, which contrast with the steely coolness of Villanelle’s life. For her part, Jodie Comer (Doctor Foster) gives a brilliant portrayal as the psychopathic Villanelle. Just watch how she manipulates the “dinner scene” noted earlier. Fiona Shaw is all stiff-upper-lip as Carolyn; while Darren Boyd effectively conveys Frank’s many failings.

Killing Eve is simply one of the best shows on television at the moment.  Although there are only 8 episodes in season 1, you won’t have to wait too long for season 2. The BBC renewed the show before the first episode even aired.

You can catch Killing Eve Friday nights on the ABC and on-demand at ABC iView.