Perhaps you are bit late to the party and have not yet powered through this most clever and British of TV series.  You may think that reading a quick online review of the first season might get you up to speed fast enough but we wouldn’t want to rob you of the absolute pleasure that is viewing season one of Fleabag.  Go back to Amazon Prime and binge away, right now. We’ll wait. 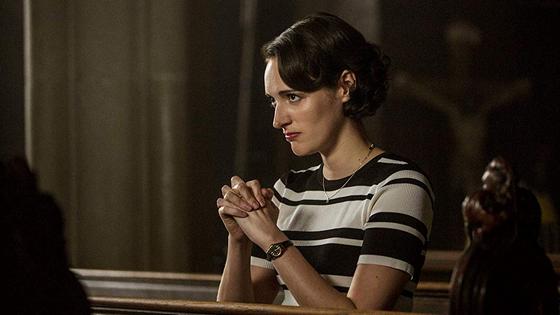 Fleabag is a London millennial whose life isn’t going quite as planned.  The death of Boo, Fleabag’s best friend and business partner, colours everything that comes after and it’s the effort to move on from this fog of loss that Fleabag battles with.  Once it was Fleabag and Boo, young verbal sharpshooters against the world, and they were everything to each other.  Fleabag alone is no longer as robust an individual and needs the instant hits and prop ups to her self-esteem that various sexual encounters afford to her.  Fleabag’s family – her sister, obnoxious brother-in-law, infuriating stepmother and charmingly vague father – are the frame around which Fleabag’s life is still loosely constructed, but she has lost that deep connection with that special someone who was just like her.

Our lead character is never given a name other than that of ‘Fleabag’ but given that she graces every shot, it hardly seems necessary to identify her beyond her relationships with family, friends, acquaintances and hook-ups.  Many of the characters in this whip-smart series are never actually named, but given titles in relation to the context in which Fleabag has met them ie Bank Manager, A***hole Guy etc.  Don’t worry, you’ll pick it up fast enough if you are new to Fleabag.

Descriptions of Fleabag as ‘angry’ and ‘angsty’ do the actor, writing and director an enormous disservice (all of these roles being capably filled by Waller-Bridge), as there is so much humour in Fleabag’s wry insights, these often being side-eyed addressed to an unseen companion. As season two progresses, who that unseen person is meant to be exactly may no longer be as crystal to the viewer.

The absolute jewel of this series is the adversarial but fiercely loyal connection Fleabag has with sister Claire, a more driven but not necessarily more intelligent version of Fleabag herself – just as funny, just as insecure, just as keen to think the best of people even when the truth of that belief is staring one right in the face.

As the first season set the bar so very high, the second season of Fleabag was always going to birthed with the weight of great expectations.  The ridiculously talented Phoebe Waller-Bridge has been collecting Emmys and BAFTA awards etc since 2016, both for her powerful writing (Killing Eve, as well as Fleabag) and for her acting across the stage and screens (Crashing, Broadchurch, Solo – A Star Wars story).  Olivia Colman appears again as the most worthy of arch-enemies, the former best friend of Fleabag’s (deceased) mother, an (annoyingly) talented artist whose installations are usually sex related and deeply embarrassing to all who are roped in to posing for them.  The back and forth of Fleabag and Stepmother are quite terrifying, playing on the knife edge of what is black humour and what is a implied series of genuine threats.

Fleabag is a show that takes you all the way there to the heart of what makes this one woman tick, and witnessing the rawness of it is liberating, heartbreaking and hysterically funny all at the same time.  Just one woman, among many, but so worthy of your time.

Seasons one and two of Fleabag are able to be watched now in their entirety on Amazon Prime.  It is understood that these will be the only two seasons of Fleabag.