The renaissance of Australian crime drama continues. Following on from Mystery Road comes SBS’s Dead Lucky, featuring Rachel Griffiths. And while this limited series may not have the sprawling ambition of Rachel Perkins’ outback drama, it still has a lot going for it. 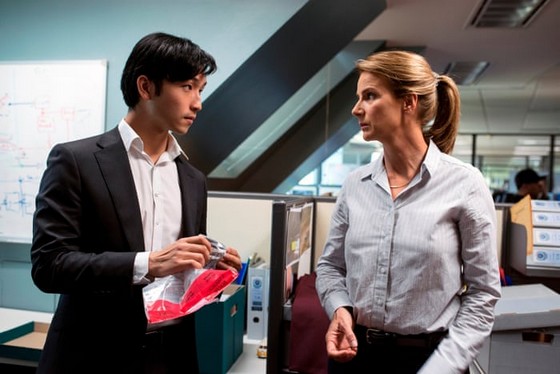 In a direct contrast to Mystery Road, Dead Lucky is set in Sydney’s inner suburbs. It’s a melting pot of ethnicity and social status. Early on we meet Mani Dalir (Mojean Aria). He’s an Iranian student who works part-time in a convenience store run by Tony (Simon Burke) and Erica Hodge (Justine Clarke). But while working alone, Mani comes face-to-face with fugitive criminal Corby Baxter (Ian Meadows). That brings Det. Grace Gibbs (Griffiths) and her new trainee detective Charlie Fung (Yoson An) onto the scene. Gibbs and Baxter have a history; one that intersects with another cop, Anna Jamison (Anna Samson) who was overlooked for promotion in favour of Charlie.

Traumatised after his terrifying encounter with Baxter, Mani confides in his girlfriend Bo-Lin (Xana Tang). But Erica’s solution to Mani’s trauma is to have Tony buy a gun off a mobster for “protection”. It’s something Mani definitely doesn’t want. But things take a decided turn for the worse when Tony ends up dead after an apparent robbery gone wrong; and Bo-Lin goes missing. And worst of all, Baxter is still out there.

Dead Lucky has two things going for it – David Caesar’s slick direction and Rachel Griffiths’ fine performance in the central role. Caesar of course has an impressive CV already. He knows his way around this kind of material and doesn’t miss a beat here. Griffiths is a towering figure in the Australian film and TV scene, and her subtly subversive performance is a real highlight.

Where the series disappoints is in some of the secondary characters. It features a surprisingly large cast, and some of the characters are under-written. That applies particularly to Bo-Lin’s student housemates, who get very little to do except look worried.

Still, despite that quibble, I thoroughly enjoyed the tightly packaged 4-episode arc of Dead Lucky. I suspect this is a primer for a possible expanded series featuring Griffiths as Gibbs. If that happens, I’ll certainly watch it.

For now though, you’ll have to be content with the current series, which you can stream via SBS On Demand.