If you’ve ever wondered how important the ABC is to Australia, watch Mystery Road. Forget about all the political posturing. Just take in how vibrantly this institution depicts and represents our country. This network has recently given us Rosehaven (set in Tasmania) and Harrow (set in Brisbane); and now Mystery Road takes us to remote Western Australia. Do you seriously think a commercial network is going to invest in those types of shows? 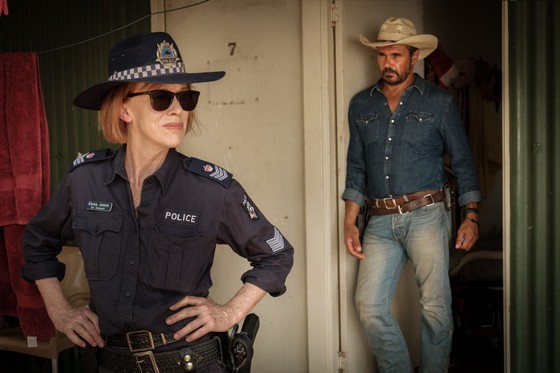 If the title is familiar, you may recall the two Mystery Road movies (the original of the same title, and its sequel, Goldstone). The 6-part series picks up after the events of Goldstone.

Rachel Perkins (Jasper Jones) directs this limited series with panache and assurance. Some of the images of outback WA are stunning, making great use of aerial photography. But Perkins really nails the human drama. Each episode ends on a cliffhanger, which builds suspense until Swan and James finally solve the mystery. Perkins and her writing team treat the characters with a lot of respect. The writers avoid caricatures and cliche. Even the one character you think is straightforward – Larry Dime, played by Wayne Blair – turns out to be more complex.

The show delves into the complicated personal and political issues of rural communities with respect and care. Perkins is careful not to lay blame. She balances the often competing viewpoints diplomatically, letting the viewer make up their own mind. She also explores some complex family dynamics – including Jay’s own semi-functional situation.

Aaron Pedersen now inhabits Jay Swan. He’s grown into the character to the extent it’s impossible to imagine Swan as anyone else. His performance imbues Swan’s single-minded determination to find the missing men. Judy Davis looks very relaxed as Emma. She deftly conveys Emma’s wry humour, which helps to counter-balance Swan’s steely resolve. The remainder of the cast – which include Deborah Mailman, Anthony Hayes and John Waters – are all good; but I particularly liked the performance of Madeleine Madden as Jay’s strong-willed daughter Crystal.

I was late discovering Mystery Road. Don’t make the same mistake. The series is still available in full on ABC iView. Highly recommended.