Tim Minchin’s genius in picking out the best bits of our common Australian experiences and presenting them back to us like a proud parent is evident once again in Upright. 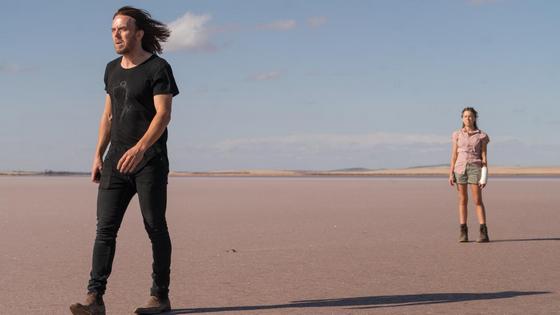 Upright opens with Lucky (Minchin), on the wrong side of the country from his mother who is seeing out her last days at home, in Perth.  Determined to re-unite his mother with her family piano, Lucky is haring west along the highway with that goal in mind when he runs into a Hilux driven by teenager Meg (Milly Alcock).

Meg is on a mission to see her mother in Kalgoorlie, and getting a broken arm from a car crash wasn’t part of the plan.  Meg guilts the hapless Lucky into pretending to be her Dad in order to get her arm put in a cast at a country hospital and is from there that they mayhem begins. The Hilux now carrying the pivotal piano, the two hit the road to Western Australia.

Lucky considers Meg to be indestructible as she drives like Mad Max, plays pool like a seasoned pub shark and swears like a fifty year old truckie but of course, she’s still a kid and not bullet proof.  Meg is running both away from something and to something, just like Lucky himself. Having royally blown up his life well before his Mum got sick, Lucky eventually loses the only thing he thought he had to bring home – the piano.

If you’re a fan of epic road trips (not that you have a choice in that if you come from Perth), there is a tonne of your Generation X youth that you will recognize in Upright.  All that is beautiful and horrific and heartbreaking about the distance between the city of Perth and the rest of them is rolled out per episode, leaving you to suck in your breath at the perfect stillness of the desert and the ridiculously memorable characters Lucky and Meg meet on the road.

Not sure how much Tim Minchin had to do with the finding the talent to star in Upright but like Minchin himself, his teenage co-star Milly Alcock is frighteningly good at this acting thing.  As Meg cajoles and shames the sweet and increasingly desperate Lucky to continue with his quest, it is no longer clear to Lucky why he is putting himself through it all.  Is it his penance, and was it only ever about the piano?

Everything from goonbags, grey nomads, country cops, footy and the likelihood of something Australian trying to kill you is included in Upright and it’s a glorious mix.  The smartarse dialogue between Lucky and Milly is gold, and there’s at least one good snort to be had with each outing.

Upright is an easily digestible show as the episodes are short and punchy.  Anything longer you just get the sense it would be a bit indulgent.  Each episode leads out with classic rock road tunes most of which you’d consider embarrassing to have on your playlist but you will still know all the words to.  Upright is brave, funny and gutpunching as to how relatable it is to the mess we can make of our lives when we just can’t forgive ourselves for what horrible human beings we can be.

Upright is an eight episode mini-series, now streaming on FOXTEL on Demand (Showcase).