Every generation is gifted with its own take on Count Dracula and vampire lore.  You may think it near impossible to put a new spin on such an iconic horror tale, so we’re pleased to report that Dracula, the 2020 Netflix version, manages to do just this. The vampire generally receives his or her best outing in literature rather than on the screen but every few years we forget all the bad TV, books and films we’ve put our time into and look forward to a new version of the seductive classic that is Count Dracula. 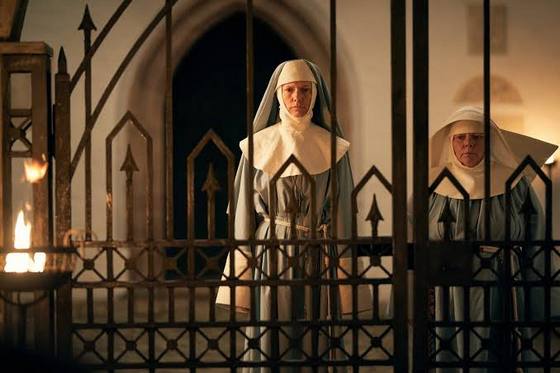 Casting is key. It may take you a while to pick who the actor is here playing Dracula (the perhaps unintentionally hilarious Major Hochstter accent in episode one threw me more than the Karloff style makeup did).  If you watched the final season of The Affair, it might be from here that you will recall the commanding Danish actor Claes Bang.

We first meet Europe’s most enduring vampire in 1897. Count Dracula, who has obviously been deprived of the good red sauce for some time, invites naive English lawyer Jonathan Harker (John Heffernan) to his Transylvanian castle for some legal assistance.  Wishing to return to the arms of his young fiancé Mina, Jonathan is upset to learn that the odd Count intends to keep him as a house guest for some time yet.

Roaming the labyrinthic castle by day and only encountering the enigmatic Count once night has fallen, Harker wakes up each morning looking a little less like himself and more like a walking corpse. There is something else keeping Jonathan in the castle though apart from his weariness, which is his belief that there are others trapped inside who need his help.

Dracula’s three episodes are around an hour long, so it is that little bit easier to immerse yourself in the blood drenched horror of watching Victorians discover that monsters truly do exist. Each episode is set in a different location as Dracula travels from home with the aim of taking the blood of the corrupt in Britain. There is the set-up episode, the journey, and the final challenge.

The judicious employment of jump scares during the castle scenes will keep you sharp if you begin to nod off a bit, as it does lag a bit until Dracula meets the curious and clever Sister Agatha (Dolly Wells) whose order has been caring for Harker since he was dumped at their convent.  Sister Agatha is a nun who has always struggled with her faith, and states that “faith is a sleeping draught for children and simpletons”.

Writers Mark Gatiss and Steven Moffat have written a script that divides its pearls between the characters of Dracula and Agatha, with their verbal duels of science and faith being the strongest scenes of the series. Kudos to the casting directors who went with two mature actors who nail their roles.  The certainty with which Agatha delivers her judgement upon Dracula is a delight, as too are the jaded sighs and winces of Dracula as he must yet again explain to the mortals that resistance is futile. Dracula gains knowledge from the blood of his victims, and gallantly charms most before the fangs descend – if he has the time.

From the makers of Sherlock, Dracula is a lush and cinematic short series that the viewer will need to hunker down with in order to reach TV gold such as the campy and seductive delivery of Dracula’s four-hundred-year-old wisdom.  This mini-series is a feast for the eyes and should satisfy those who are fans of the traditional horror tale, yet appreciate a spin away from the lore to be fascinated anew by their favourite blood fiend.