Sam Mendes is a terrific director. American Beauty, Revolutionary Road and the Bond films Skyfall and Spectre all appear on his resume. But he exceeds even those lofty heights with his latest film, 1917. This 2-hour visual and emotional extravaganza cements Mendes’ reputation, and provides a stunning new perspective on the war movie.

Much as Christopher Nolan did with Dunkirk, 1917 redefines what a war movie can be – and perhaps should be. Technically brilliant filmmaking brings a credible story with real stakes to life. The result is a visceral journey that will stay with you long after the lights come up. 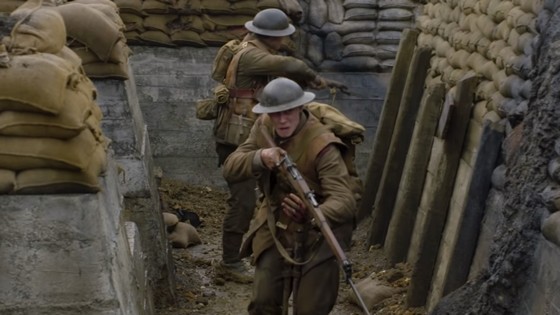 As the title suggests, the film takes place over 2 days in 1917. In the opening scene, two British soldiers – Lance Corporals Blake (Dean-Charles Chapman) and Schofield (George MacKay) – are resting in a French field. An officer takes them to General Erinmore (Colin Firth). He informs the pair that what seems to have been a recent German retreat is in fact a trap. Aircraft have spotted new lines set up for a deadly ambush of a British regiment.

Blake and Schofield are to make their way – across what was recently German-occupied territory – to the regiment and give them Erinmore’s signed order to call off their planned attack. Two factors complicate the situation – the attack is due the following morning, and Blake’s brother is part of the regiment in question. With a map and their wits to guide them, Blake and Schofield set out across the blasted landscape and into the unknown.

The most immediately striking feature of 1917 is the extraordinary cinematography, which follows the pair every step of the way. Like say Birdman, it gives the appearance of one continuous take. The camera seems to magically track the protagonists. It starts behind them, moves in front of them, swivels back and looks forward. The lens almost becomes a third companion on the journey. But that’s not the only remarkable visual element. 1917 contains what’s probably one of the most stunning single shots I’ve ever seen. But it also includes other amazing images (a devastated village lit by flares being only one of them). Roger Deakins (Blade Runner 2049) is the genius behind the lens; while Lee Smith (Spectre) makes it all look effortless with his film editing.

The visuals though are only part of a larger equation. Everything of course pivots around the script – co-written by Mendes and Krysty Wilson-Cairns. They succeed brilliantly – the key measure being that the 2-hour running time just flies by. The end titles hint that Mendes used real stories from his grandfather as a basis for the script. It’s also thoughtful; hinting at events rather than spelling them out. Mendes also employs trees as a motif throughout the film, perhaps suggesting the beauty of nature being degraded by the venial actions of humans. The action is propelled (sometimes almost literally) by Thomas Newman’s score. Dennis Gassner’s production design captures what seems to be an authentic World War I look and feel.

If you look on IMDb, you’ll see a very long cast list; but most of the action involves George MacKay and Dean-Charles Chapman as Schofield and Blake. The closing shot of the film mirrors the opening shot, so we’re with these characters virtually the whole way. MacKay gives a remarkable performance as Schofield. He’s the more experienced of the two, and his experience has brought a certain cynicism about the war and his role in it. Chapman is also fine as Blake, the more naive but also more driven of the two. A host of prominent British actors make appearances, including Colin Firth, Mark Strong and Benedict Cumberbatch.

As a film experience, 1917 is just on another level. This is filmmaking at its finest.