Farming and idealism. They hardly go hand in hand. And yet that is precisely what a young US couple – John and Molly Chester – was looking to create by getting back to traditional farming principles to coexist with nature. She was a foodie, who knew the value of good, wholesome, tasty produce. He was a cameraman and knew how passionate she was about the subject. But they had no money for a total upheaval of their lifestyle. And then the motivation came from a most unlikely source. 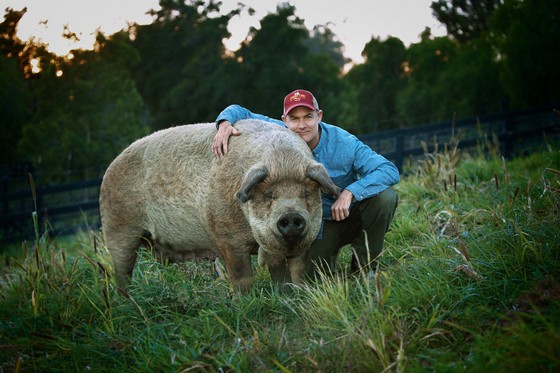 While doing a story on a facility operated by a good Samaritan housing 200 dogs that was about to be closed permanently, he couldn’t help himself and adopted a beautiful black hound named Todd. John and Molly were living in a tiny LA apartment and the dog they got barked all day when they were away. Eventually they received an eviction notice. It was then that the pair shared their desire to create a sustainable farm with their friends and family, with a view to finding financing for their venture.

Whilst they were laughed at, the connections worked and they found the investors they were looking for.

Then the really hard work began for the rundown farm they ended up on (200 acres in the foothills of Ventura County) had dirt all around it that was so hard that it felt like bitumen. This extremely well made doco takes us through just what the pair went through over the next seven years.

Every step forward was met by another backwards. Drought, fire, driving rain and pests were their constant bedfellows. Early on they connected with a champion of sustainable farming and he helped guide them. Persistence in the face of adversity and diversity were the keys. When it came to the latter, it was a case of variety in the produce they planted, the animals they housed and the wildlife they attracted. But the first step was cultivating the arid land, devoid of nutrients.

This is quite some tale, the moral of which is “where there is a will, there is a way”. John and Molly provided work opportunities to people from around the world who had a passion to match their own.

The cinematography is breathtaking, the narrative arc compelling, driven by John’s observations in a film he directed. In fact, he – and four fellow cinematographers –were shooting 365 days a year for nearly eight years.

The doco also features some colourful and engaging animation by Jason Carpenter.

The Biggest Little Farm is a feel-good story about a couple that are living out their dream. Rated PG.