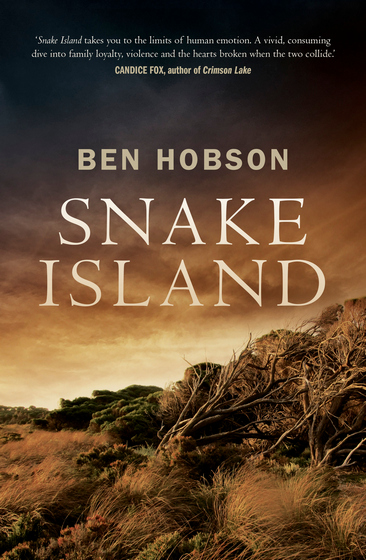 Snake Island, like other notable Australian mentions published in the last couple of years, straddles a literary space between dark drama and crime fiction.  The term literary thriller has of late been used to describe such works.  Acts of violence committed in small or otherwise closed communities offer rich opportunities for intensive explorations into what comes next beyond the act itself. Great conflicts all have a point of origin, and they all escalate to catastrophes by a series of ill-considered decisions.

There is little sympathy to be found anywhere for a man who beats his wife.  Caleb Moore finds this out soon enough into his stay in prison, convicted for the assault that has finally severed his shaky marriage to Melissa. The prison staff are fine with turning a blind eye to a little lay justice, which comes in the form of visits from a local thug, Brendan Cahill.

Caleb’s father Vernon, who has not visited Caleb for the last two years, learns of the attacks and knows that the time for staying away is now over.  Much like Agamemnon petitioning Achilles for the return of the body of Hector, Vernon truly believes that a fathers plea must be heard and respected.  His idea of speaking to Brendan’s father, the head of a local crime family, comes to be the worst decision made in his long life.

Snake Island is at first a busy work, introducing its readers to a host of characters that are all passively waiting for their lot to change.  You won’t need to suspend your belief in the plights of these people but there will be the necessity of overcoming a natural repulsion for some of the key players (a wife beater, even repentant, is still a wife beater).  Also, there is the necessity of immersion in such a depressing place populated with desperately forlorn characters.

There is a rising tide of despair and hopelessness that threatens to swamp everyone we meet in the pages of Snake Island.  We encounter townspeople who believe themselves trapped by circumstances and morosely accept their fates as being inevitable.   What author Ben Hobson deftly guides the reader to is to the understanding that there is a process in such chaos.   There will be a purpose to the witnessing of so much relentless suffering.

The time period in which Snake Island is set is the late 1990’s, before the rise of Australia’s access to the internet and of course smartphones with their instant connectivity.  The events of Snake Island are all that more suffocating for their technological and geographical isolation.  There is such a weight to the narrative, such a sense of impending doom, that the final chapter is incredibly tense and you don’t dare take your eyes off the page.  This is a very violent novel, and breaks more than one taboo of reading crime fiction, so steel yourself for this and you will be sucked into such darkness that you may find it hard to imagine how it is all going to be wrapped up by novel’s end.

Ben Hobson currently teachers English and Music at a Queensland state high school. Hobson’s first novel, To Become a Whale, was published in 2017.

Snake Island is published by Allen and Unwin.