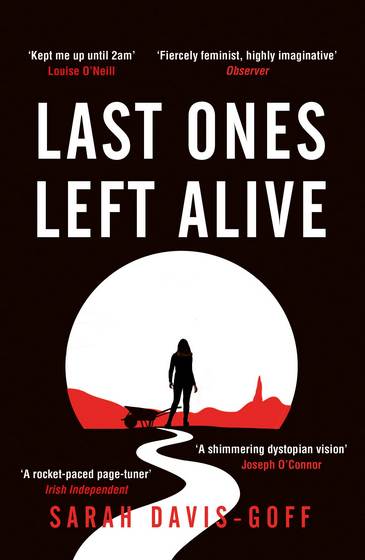 Pandemics, post-apocalyptics, zombie dramas, dystopians – choose your preferred  genre label here – generally seem to go all out large or small and intense.  If you are one of those readers who simply must have delivered a very finite scientific explanation of how the world all goes to hell, you may find that you tend to read novels which pan out to take in all the global devastation and resultant anarchy. These works generally involve shadowy government agencies, roaming gangs of survivors intent on creating violent dictatorships, lots and lots of guns etc. Last Ones Left Alive instead narrows its survival tale focus down to three women who have formed a new family together since the end of civilization reached their small Irish community.

Orpen knows only the now and has no memory of the world as it was in the before.  The world fell from grace well before Orpen was born, leaving Orpen’s Mam to face the danger of birthing and raising a child in a world now infested with roaming altered humans who seek only to kill.  Orpen’s whole existence until now has been a tiny island off the Irish coast, safely isolated from the hungry and monstrous skrakes on the Mainland.  Orpen has been taught to be mindful that the larger world is not what it once was and that she must keep up her levels of physical fitness and fighting tactics to evade anyone who seeks to harm and threaten the four of them – Orpen, her dog Dagger, her mother Muireann and her mother’s partner, Maeve.

Venturing out beyond the safe confines of their small island, Maeve and Orpen are still dealing with the recent death of Muireann when Maeve herself is bitten. The ethereal knowledge of Phoenix City, a newly emerged safe town somewhere on the Mainland means that Orpen must keep Maeve with her, even as Maeve slides in an out of consciousness and the feral reality of becoming one of the ravenous skrakes.  Orpen is convinced that Maeve knows exactly where Phoenix City is and cannot let go of her only opportunity to find a way to safety and the support of others.

There are so many different rules with ‘virus’ post-apocalyptics that it can be difficult to find a new take on the premise. Each writer needs to at least in part work around such rules written and set by all the pandemic writers that came before them.  The commonalities of infection via bite, what the undead most crave and how to kill them (again) are broadly accepted to be the same from book to book, with the variants being the scale of the horror and how society adapts to its brave new world order after all advancements in culture and civilization are erased.

Debut author Sarah Davis-Goff has written a thoughtful and precise novel of how one person, born after the fall, comes to the end of the line when she is finally alone and must seek out the company of others. It is not a matter of one just becoming lonely, it is an urgent matter of needing other people around you in order to survive. How it is to negotiate a world that has moved on from such knowns and protections of government authorities, medical assistance, community infrastructures etc is explored through the viewpoint of a teenager, who like every teen before her, has always been expected to question what she has been told.  Last Ones Left Alive gently takes the reader through what it indeed one day might be like, as we approach the end of our violent and uncertain times.

Like all dystopian novels hitting the shelves right now, Last Ones Left Alive is uncomfortably easy to accept as a possible take on our near future.   Tautly but simply written in the first person, this novel does veer off into a little lore which doesn’t do much to add to the storyline, but which inclusions might alleviate some of the bleakness of its otherwise harsh landscape for the reader.

Sarah Davis-Goff is an Irish journalist whose work has been published in the Irish Times, the Guardian and LitHub.

Last Ones Left Alive is published by Hachette Australia.