True crime fans have found a home in Netflix, which is firmly the go-to streaming platform for documentaries and movies based on real life cases of the missing and murdered.  Lost Girls focuses on American sex worker Shannan Gilbert, who went missing late one night in 2010 in Long Island after fleeing from a client’s home. 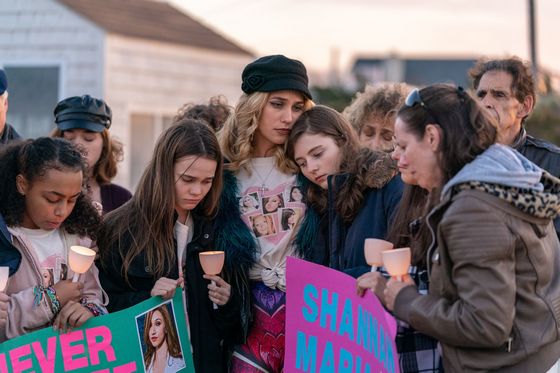 During the search for twenty four year old Shannan, the remains of ten other murder victims were discovered in the area.

It seems sex workers, when they go missing, are not considered priority cases for police investigators.  No shock there, right?  The Long Island Serial Killer was believed to have killed up to sixteen women and girls, perhaps right up to around 2013.  Lost Girls, An Unsolved American Mystery was written by Robert Kolker and is the book upon which this Netflix film has been based.  The predator coined as ‘The Long Island Serial Killer’ has never been caught.

Single mother Mari Gilbert (Amy Ryan) is juggling two jobs and trying to keep tabs on what her three children are up to.  Shannan Gilbert (Sarah Wisser) advertises her services as a sex worker on Craiglist and this is something Mari would like to keep secret from her two youngest daughters. When Shannan doesn’t turn up for a scheduled family dinner, Mari puts on a brave face but grows increasingly concerned when she is unable to get hold of her eldest.

Shannan was last seen in a distressed state in the gated community of Oak Beach, Long Island, and had placed a call to 911 to report that she was being chased.  It took over an hour, as Mari later discovers, for the police to attend the scene.  Police commissioner Richard Dormer (Gabriel Bryne) admires Mari for her tenacity in pushing for answers, but firmly believes that the grieving mother needs to let the investigation proceed procedurally and not reactively to her claims.  As the area is combed over for more victims the following year, the body of Shannan is discovered also.

At the encouragement of her two youngest daughters, Mari joins a group formed by the grieving families of the murder victims and finds some solace in numbers.  Mari however firmly believes that her own family is not the same as the broken families that she meets. Frustrated with what she believes to the police wilfully ignoring possible leads and obvious suspects, Mari takes it upon herself to find answers,  inserting herself into the investigation and garnering support from the public and the victim’s families as she refuses to let her daughter’s death go unavenged.

It’s a twitchy thing to want to comment on the entertainment value of a true crime documentary or adaptation, knowing that these are not fictional characters, but real people who lost their lives.  This is still an unsolved case, so you would hope that Netflix making a movie out of the unsolved murders might help to further the real life investigation – which had new evidence presented as recently as February of this year. Six victims (including one transwoman and a baby) attributed to the same killer remain unidentified.

So is Lost Girls entertaining?  The main performances given are certainly compelling, only the sequences of events are rather woodenly delivered.  There is frustratingly little perspective included from the police, so very little (forensic or otherwise) detail is disclosed as to what the police actually knew or thought at the time of the discovery of the bodies.  Poor communication, outright dismissal of the concerns of the families of the missing women and some artful misdirection seems to have been rife during the investigation, and it is heartbreaking to see Mari Gilbert face obstacle after obstacle as she doggedly treads her own path to the truth.

The armchair sleuth in you may be intrigued by what Lost Girls doesn’t reveal rather than what it does.  There is a tangled mass of tangents and linkages between the victims in Lost Girls however the story focuses on Shannan Gilbert and the charge led by her mother Mari to find her daughter’s killer.  It won’t take you much googling to fall into a internet rabbit hole about the Long Island murders, including all of the popular theories such as that there were possibly two killers operating in the same strip of land at the same time.

Lost Girls features as mentioned some strong performances by actors doing the best they can with what they have been given.  Amy Ryan is a force of nature as the parent who will not be sidelined in the investigation into the death of her child.  Middle daughter Sherri Gilbert is played convincingly by Thomasin McKenzie, and is these two who add the required dynamic intensity as to what is otherwise a slow pace in such a short film which had so much source material to work with.

As another tragic footnote to this story, Mari Gilbert was murdered by another daughter, Sarra, in 2016.

Lost Girls was first shown at the 2020 Sundance Festival and is currently streaming on Netflix.