Jiro Dreams of Sushi (2011) is a respectful documentary chronicling the life of Jiro Ono, the most famous sushi chef in Tokyo.

For 75 of his 85 years, Jiro has been perfecting the art of making sushi – and the pursuit continues. He works from sunrise to well beyond sunset, tasting all the produce, meticulously training his employees and carefully finessing the presentation of each sushi creation. Although his restaurant Sukiyabashi Jiro only seats ten diners and has a starting price of $300, it’s a phenomenon in Tokyo It has the prestigious 3-Star Michelin accreditation. That makes Jiro Ono the oldest Michelin-starred chef alive. 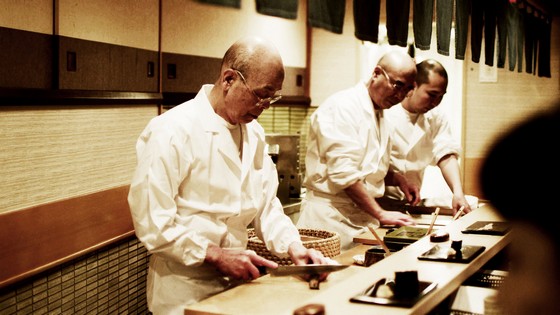 The documentary chronicles Jiro’s life as both an unparalleled success in the culinary world and as a loving yet complicated father of two. Despite their earlier aspirations of a tertiary education, his children left after high school and followed in his footsteps. Jiro’s incomparable work ethic is the driving force behind Jiro Dreams of Sushi, but the heart of this film is how that ambition has influenced his sons’ lives as well.

Elder son Yoshikazu – at age 50 – is the heir apparent to the sushi empire; but Jiro isn’t ready to retire or to relinquish any of his responsibilities. With a famous father guiding and critiquing every decision, Yoshikazu is unable to reach his full potential. However, he is proud to learn from a true sushi master, thus revealing the inner struggle of how a dutiful son shows reverence to his father yet controls his own domain.

His younger son already has his own sushi restaurant, which has been designed as a mirror image of Sukiyabashi and is located in another part of Tokyo. It charges less because Jiro is not the man on hand.

Director David Gelb’s frequent family trips to Japan while growing up ultimately led to his fascination and admiration for the art of making sushi. Food critic Yamamoto, who is interviewed for the documentary, notes Jiro’s quest for perfection and his workaholic nature. Jiro dislikes holidays. They are too long for him, Yamamoto says. Others interviewed include Jiro and his two sons – primarily the elder – and a number of other sushi chefs.

Jiro Dreams of Sushi pays homage to Jiro and his legacy. I found it fascinating and engaging. It is a story about a man’s single-mindedness and his ability to achieve, forever continuing to strive for better results. One is left admiring him but nevertheless asking, at what cost?

Jiro Dreams of Sushi is streaming on Docplay from 9 April 2020.