Cartoonist, painter, philosopher: Michael Leunig has plied his trade for decades. He’s become a one-man industry, churning out his offbeat, but highly familiar drawings, artwork and original poetry. Of course, over the distance, he has been interviewed by superior minds like Andrew Denton and Virginia Trioli. Snippets from these interviews are included in this documentary. They are coupled with other historic footage. 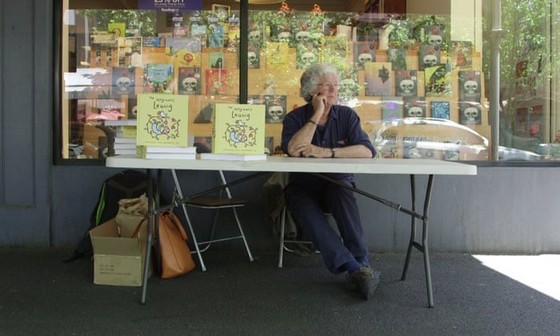 Filmed over five years, The Leunig Fragments tries to piece together what makes the man tick. Estranged from his now deceased parents and siblings, wives and children (only one of his four children was interviewed), Leunig comes across as a one of a kind whose talent was first recognised by an observant teacher, who encouraged him. He is considered but distant and in a world of his own, but somehow he can relate to others.

He makes a lot of the little things in life that appeared to have driven his consciousness: the feeling of having a fish on the line; falling in love for the first time … as a child; the devotion of a duck, one of his totems. While Leunig is interviewed for the doco and family photos shown, reconstructions of his childhood come from actors and are cleverly woven into the narrative. I was eager to learn more about the man and his perceived mission and the documentary certainly opened up his scrambled life. We see where he works and his seemingly simple and ordinary existence – this remarkable visionary who acknowledges he is preoccupied by death.

I reached the conclusion that he’s a man whose mind works differently from others, a man who cares and has several outlets to let others know how he feels through his craft and utterances, for us to interpret as we will. He has devoted and fiercely loyal supporters – those who are endeared by his freedom of expression – and others who are offended and outraged by his musings. The Leunig Fragments is a celebration of Michael Leunig, the enigma.

It is only through the persistence of writer, director and co-editor Kasimir Burgess that we gain some insights into a being who won’t be defined or labelled.