The satire about the film and publishing industries in Sydney (the Emerald City of the title) is also about marriage and its strains, especially when it is of two competitive partners trying to find a balance in life. This is Australia of the late 1980s, full of entrepreneurial optimism and materialism, that see antihero protagonist Colin (Jason Klarwein) teaming with hack writer Mike (Rhys Muldoon) to work on a pet project.

Ahead of Act Two’s obvious ‘80s cultural references there are subtle nods to the era through double breasted suits, shoulder pads and pale pastel clothing. A screenplay is completed on a typewriter and updates about the news of the world come courtesy of an actual newspaper. Some of the play’s dialogue, however, lands with more of a modern day thud, especially the gender jokes Mike directs towards his significantly younger girlfriend Helen (Megan Hind). There are also some still funny one-liners, often from Marg Downey in fine form as the deliciously dry Elaine, Colin’s agent and producer.

Despite his character’s chauvinistic interactions, Muldoon helps us find a likeability in Mike’s brash insensitivity, before his undermining is fully revealed. Indeed, he seems to be having a great time playing the role of the archetypal Sydney operator. Likewise, Klarwein manages to give talented and celebrated screenwriter Colin an every-man sensibility that adds to the show’s appeal. His performance is a vital one, especially in his animated imitation of his just turned teen daughter’s dilemmas. Nadine Garner brings a passionate energy to Colin’s socially conscious, successful publisher wife Kate.

The aesthetic of costumes et al darken as Colin’s world collapses. David Walters’ lighting design works well with the simple but dynamic staging, allowing much of the action to take place in a glass box. It affords some wonderful mirror imagery and alternative visual perspectives. 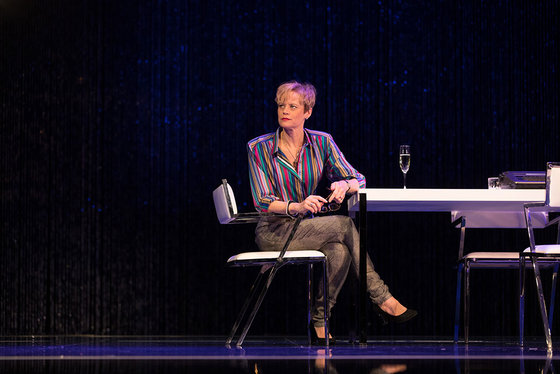 Under the direction of outgoing Queensland Theatre Artistic Director Sam Strong, this is a sparkling revival of what is clearly an enduring play. While it is an entertaining story, it also still has much to say about human nature and our society. While not ground-breaking in its form, it puts real people and situations on stage – characters that despite the distance of time still possess recognisable human traits, conflicts and unfulfilled dreams.

David Williamson has long been a writer of funny, smart and popular pieces. Given his announcement that, after half a century of writing plays, he has written his final drama, this is a production that everyone should see. Emerald City is playing at QPAC, The Playhouse until 29th February, 2020.