Situational comedy of a different kind, Why Women Kill is not at all what you might expect from its title.  Why is it that three murders have happened in the same house, all in different eras?  Don’t blame the house. 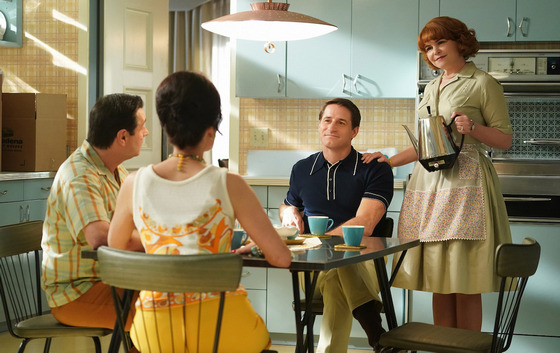 Relationships are hard, and the reasons why they fail for the couples (and in one case, a throuple) of one Pasadena mansion are essentially all the same over the decades. Someone is always wanting more.  Bloodshed is inevitable.

In the glorious pastel technicolour of 1963, bubbly Beth Ann Stanton (Ginnifer Goodwin) is trying to be the best darndest wife that she can be to her husband Rob. Rob sadly though is a cheater, and he’s not being terribly original about it either.  Beth Ann is determined that the way to save her marriage is to cosy up to the unsuspecting waitress her husband is banging.

In 1984, Simone Grove (Lucy Liu) is on her third husband and desperately trying to maintain her status as the most envied woman at her country club.  Learning of her husband’s gay betrayal during her own house party, Simone takes a little comfort in the arms of the night’s bartender, the eighteen year old son of her best friend.

In 2019, Taylor (Kirby Howell-Baptiste) and Eli (Reid Scott) maintain an open marriage with uneasy memories of Eli’s past troubles with addiction.  The rule of not forming emotional connections and keeping their hookups out of the marital home goes out the window when Taylor brings home the free-spirited Jade (Alexandria Daddario) who has a history of attaching herself to couples.  Jade though is not as uncomplicated as she appears.

Why Women Kill is bitingly funnily mix of generational satire and campy frolic filmed to extract maximum drama out of every single situation. There is plenty of teasing as to what we might expect the spurned women to do, and how the men might react   What the viewer never knows though is who has been killed, and who was the killer? So many possibilities. The neighbours to the most impressive house in the street are all bystanders when the sirens and flashing lights inevitably arrive.

For her fans, the prospect of Lucy Liu doling it out 80’s style in shoulder pads and stilettos should be enough to bring them to Why Women Kill and for everybody else, may we present Lucy Liu and Ginnifer Goodwin, and Reid Scott.   This show is billed as the stories of three women, but it is more the story of three marriages; in the 2019 story, the husband is more the focal point as he negotiates living in a relationship with two women.  It’s car crash level anticipation as we know it’s all going to fall apart, we just don’t know though as we watch what the tipping point to murder will eventually be.  But it’s coming!

Wy Women Kill has delicious little inclusions at the beginning of each episode; tango dancers, a neighbour who grows up and interacts with the three families over the decades, a choice secondary character from each era commenting graveside on how disappointed they are with the turn out of events.  These add to the ‘Hollywood’ experience of Why Women Kill, and it’s a reminder to the viewer that none of these disasters are operating in isolation – there were always witnesses, minor perhaps, but present.

Why Women Kill is a ten episode series streaming now on SBS on Demand.