Charlie Parker walks the world alone, but in his dreams and in the thinner moments between the worlds of those who breathe and those who no longer can, there visits two particular ghosts.  The Dirty South is a prequel novel, long awaited for, however may not go back quite as far in the life of Charlie Parker as a fan might expect. 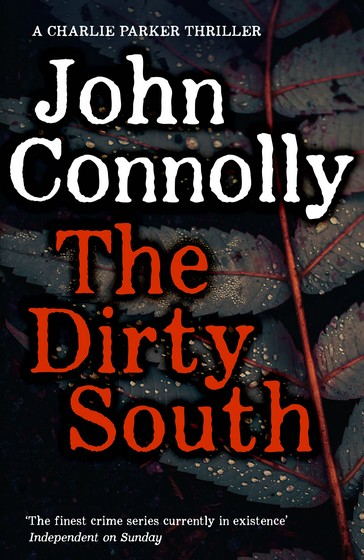 In 1997, the grief is fresh and a young Charlie Parker is no longer serving the thin blue line of the NYPD.  Chasing leads on killings involving particularly heinous mutilations brings new widower Parker to Burdon County, Arkansas. The manner in which Parker’s wife and child were murdered suggests that the killer or killers had form, and the death of three young black women in the rural community may be the passing marks of a man that Charlie now only exists to find.  As is the way with small towns, the arrival of an outsider fresh on the heels of another murder does not lend itself to a friendly reception.  This is also the way of Charlie Parker, being that Parker cares little for such things in comparison as to how he regards the neglected needs of the dead.

Deputized to assist the overwhelmed local police force, Parker is soon questioned and has cause also to question himself as to why he has stayed on in a town seemingly as toxic as the inky black lake which it surrounds.  The plans of a large corporation to invest in the area would be at risk if Burdon County came to be considered the playground of a serial killer, and it is with this in mind that Parker recognizes the need to approach his investigations with a view to the endgame. The most powerful family in the locale is involved, the Cades; three troubled adult children and a dying patriarch determined to cement his legacy before the good Lord cometh to assert his claims.

Operating largely alone in this particular niche space of literary crime fiction for so long, John Connolly has again with The Dirty South successfully risen above the very high bar set by his own previous works. Crime fiction with developing aspects of woo-woo have proven to be a rather dark and delicious element in Connolly’s last seventeen complex and elegantly written novels. They are not depressing reads as there is always hope, and the burning desire to find out what the hell the world intends to do with the man who walks a fine line between serving the needs of both the living and the dead.

The Charlie Parker we encounter in The Dirty South disturbs the peace with a presence that is magnified in later novels, that being often detected as being ‘other’.  Parker existing in the same space as killers and small town corruption is common in this series, and it is incredibly satisfying to read The Dirty South, a novel of such complexity which also gives a little more colour to a character that we’ve loved for so long.  Charlie Parker at first appears to be a rather mild mannered man, until even the most obtuse sense with absolutely certainty that Parker is one to be feared.

The touchpoints of The Dirty South are that the deaths of the (poor) women are considered annoyances more than they are considered wrongs to be righted. It’s noted with loving exasperation that the duplicitous natures of the male characters in this novel receive a lot more page time than the plight of the victims.  For series fans, we encounter for the first time (way into the read) the dark duo that is Angel and Louis.  It’s a bit of a rockstar moment, to be honest.

Connolly writes on the sides of the angels (pun only slightly intended) in that his descriptives of disease-ridden souls are written with the same meticulous care in which he describes the landscapes of the American south.  The works of John Connolly exist as a testament as to why everyone should read crime fiction.  If you’re new to this series, The Dirty South will do you well as a standalone until you start scheduling in all the priors – as a sensible and discerning reader should.

The Dirty South is book #18 of the Charlie Parker series, written by Irish author John Connolly. All of Connolly’s novels have been best sellers.  Every Dead Thing, Connolly’s debut work, was published in 1999.