It’s 1945, towards the send of WWII. The German navy are even sinking hospital ships. When the film opens, a group of survivors from a sunken hospital ship are adrift somewhere in the North Atlantic. Tensions are high as they are desperately short of food and water. This motley crew of survivors include Sinclair (Nathan Phillips), a laconic Australian soldier and former prisoner of war; Jane (Alyssa Sutherland), a hard bitten British nurse; Russian sniper Teplov (Alex Cooke); Faraday (John Lloyd Fillingham), a cynical and cowardly British cryptologist; Jackson (Christopher Kirby) a former merchant sailor who is at loggerheads with obnoxious US sailor Bigelow (Mark Diaco). 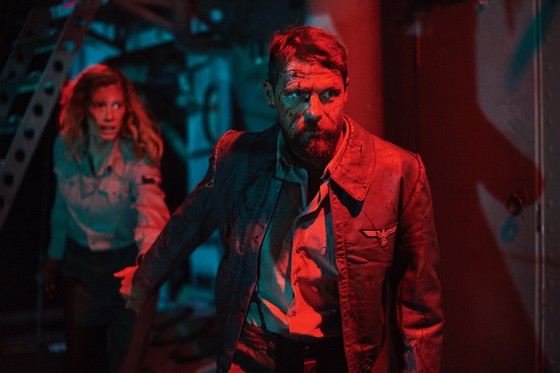 Then they happen upon an abandoned Nazi minesweeper. They manage to clamber aboard only to discover most of the crew have been horribly burned to death under mysterious circumstances. They also find Mya (newcomer Ruby Isobel Hall) cowering. The traumatised young girl seems unable to tell them what has happened. Searching further they also discover in the bowels of the ship a bullion in gold and some strange historical artefacts and a couple of steel coffins heavily decorated with strange images. When one of the coffins is opened a malevolent ancient vampire is let loose and begins to kill off the survivors.

However, many of the characters are a little too stereotyped, and the plotting is a little formulaic and predictable. However, there are some good performances, with Phillips good as Sinclair and Kirby particularly strong and sympathetic.

Blood Vessel is a tight and claustrophobic horror thriller that offers yet another variation on the haunted ghost ship sub-genre and the Nazi horror sub-genre (a la Dead Snow). Dix and his co-writer Jordan Prosser obviously know their horror film history and have drawn inspiration from some of the more obvious sources. The film effectively mixes vampire mythology with elements of the mystery of the Mary Celeste, references to classics like Alien and Nosferatu, and the well documented history of the Nazis fascination with the supernatural and the occult

Blood Vessel is the sophomore feature from Australian filmmaker Justin Dix (the 2012 horror film Crawlspace), who comes from a background in special effects and prosthetic makeup. Dix has worked on films like The Babadook and a couple of the Star Wars prequels that George Lucas shot in Australia. The film was produced under the auspices of his own Wizard of Oz company which is based in the Melbourne suburb of Williamstown. The film was shot on various locations around Williamstown as well as on board the HMAS Castlemaine, an actual restored WWII vessel, which lends authenticity to the setting.

This is a low-budget production, but Dix manages to make the most of his limitations. The period detail is good. His creation of the batlike features for the vampires is distinctive. The gore is kept to a minimum. The film is unevenly paced, especially in the first part of the film as Dix established his characters, although he effectively ramps up the tension and the gore in the final half hour with plenty of decapitations and blood spattered killings. He also creates a claustrophobic atmosphere through the use of ominous, moody lighting and by tapping into the obvious conflict between the characters. Cinematographer Sky Davies uses a suitably dingy colour palette of blue and black to heighten the tension, and the use of a red colour scheme throughout serves as a potent motif and symbol for blood.