Garry Disher returns once more to the world of small town policeman Paul Hirschhausen in his latest book Consolation. Consolation appears in quick succession after the second book in this series, Peace, which itself came after a long hiatus after Bitterwash Road. Consolation shows that Disher has clearly found his groove with Hirschhausen. 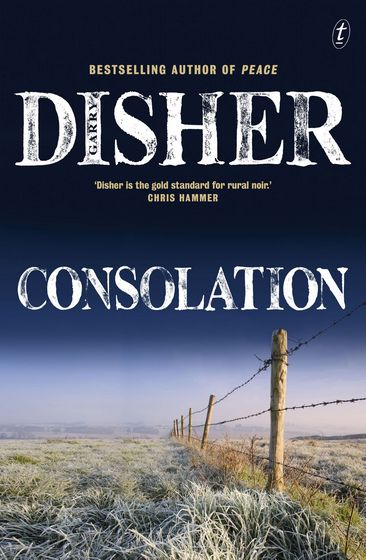 Once again, Consolation starts with a series of small crimes that link and interleaved and build up to something much bigger. A snowdropper is stealing women’s underwear from their washing lines; a local landowner has turned up at a local school to have it out with the principal about the issue of ‘voluntary fees’; a group of Irish con artists are stinging old ladies; and, more darkly, a girl who is being home-schooled is found to be a virtual prisoner. The situation soon turns even more serious and Hirsch has to take on more responsibility, with a man and his son on the run for injuring Hirsch’s boss and shooting an environmental inspector, a potential stalker and hints of major financial malfeasance in the community. And it all builds to a tense, page-turning finale.

This is another classic Disher tale. Hirsch (and Disher) is as interested in what makes these local communities tick as the crimes themselves. Besides his crime solving, Hirsch does not miss out on his drives around the area checking in on the people who live in and around the town. There is a lot going on here, from the seemingly mundane (graffiti on local wind farms) to murder. But Hirsch, with his ear to the ground, understands that in some ways, through the community, it is all connected.

Of course Hirsch is not your standard one horse town country policeman. As previous volumes have revealed, he was a detective who is now serving time in the bush. This generally means that when the city detectives turn up to help, he is either going to be ignored or show them up. But as the series goes on, Disher is embedding Hirsch more firmly in this community and its concerns, giving him greater insight into details that he may previously have missed as an outsider.

There is the temptation now to label every crime novel that is set in regional Australia as “rural noir”. But while this works as a selling point it does not apply neatly to either Disher’s Peninsula or Hirschhausen series of procedurals. While there is some darkness (these are crime novels after all), they are really about those regional communities, how they operate, what brings them together, what pressures they are under and what might tear them apart. And there are few better explorers of Australia’s rural heart in any genre than Garry Disher.