Rumaan Alam’s latest book Leave the World Behind starts in an idyllic manner – a family on holiday on Long Island. But despite the tranquil and familiar setting – an Airbnb in the country with a swimming pool, plenty of snacks and trips to the beach – there is plenty of foreboding. There is an underlying tension, caused if nothing else by the trappings of a city life that the family cannot leave behind – screen time for the teenagers Rose and Archie, mother Amanda sneakily checking her work emails. But then the internet and satellite go down and there are strangers knocking at the door in the middle of the night. 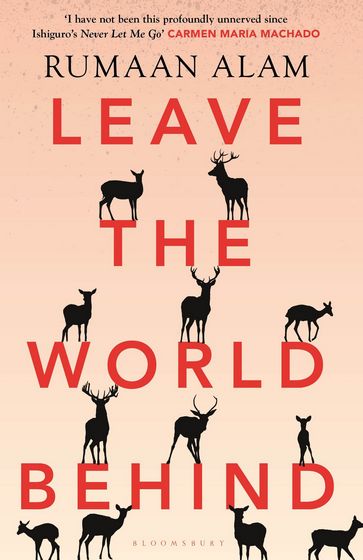 GH and Ruth are running from something – a blackout in New York, that is possibly the harbinger of something bigger and darker. They are seeking sanctuary, but their sanctuary is already inhabited. GH and Ruth claim to be the owners of the AirBnB, which they rent out during the holiday period to help pay for their renovations. Clay and Amanda are a white, middle class American couple and when confronted by an older black couple they have to fight against deep seated prejudices. Alam wisely does not let this particular tension play too long. Rather, he casts his narrative eye across the points of view of all four of the adults, firmly establishing at least in the readers’ minds all of their positions as their prejudice, compassion, suspicion and empathy conflict with each other.

Alam spends the rest of the book ramping up the tension on his six characters and observing the shifting relationships across the three generations in the house. But more than this, he explores our unpreparedness for disaster, the dawning realisation that in the face of significant challenges “comfort and safety [mean] nothing”. That safety is an illusion. But also, when the temptation is to withdraw and to take a positive that it is every person for themselves it is still possible to make connections, to find a shared experience and goal and to strive to create community.

Leave the World Behind is a pre-apocalyptic novel. Alam gives some insight of what is going on in the rest of America and later on the world and also provides some brief but horrifying glimpses of the future. In doing so he is able to contextualise the first forty eight hours of this event, how people process and deal with an impending disaster, drawing conclusions rightly or wrongly from a very limited set of very personal data. And while it is a stretch to compare the disaster in this novel to Covid, there are precedents for this kind of behavioural trade off being seen in other recent natural disasters and a not so subtle consideration of how humans are responding to climate change.

While taking a little time to call out some social ills and to consider issues of race and class, Alam is at heart interested in human interactions. He wants to explore how people react and relate to each other under pressure, juxtaposing the lazy insouciance of the first few chapters with a growing sense of unease, panic and confusion. And, importantly, how his characters and the people they encounter are able or not to redefine the meaning of community, of family and of home. Leave the World Behind is a scary and tough but is also a compelling and ultimately compassionate book.