First-time documentary director Catherine Dwyer starts her career off impressively with Brazen Hussies. This highly entertaining film charts the course of the so-called “women’s liberation” (the term is pretty dated now) movement between about 1968 and 1976. Over the course of the film’s crisp 93 minutes, Dwyer explores what motivated the movement, where it went and what it became. 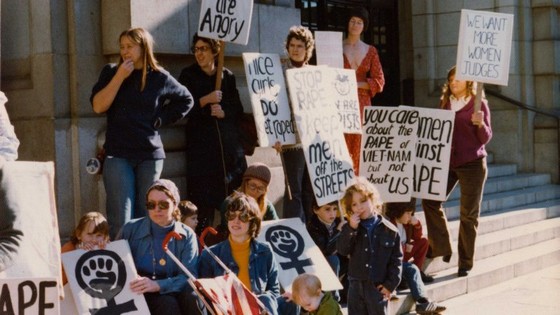 In the late 1960s, a perfect storm of discontent provided fertile ground for a vanguard of women who weren’t prepared to cop Australia’s dysfunctional monoculture. Misogyny ran deep – from the pub, to the newspapers, to Parliament. These women imagined a different future; one where women could make their own decisions, not beholden to the whims of men. Against a wall of opposition – not only from the establishment but also supposed allies – the women’s movement grew to become a powerful force in the 1970s.

It kicks off in a small way – with two women chaining themselves to the bar of a Brisbane hotel. By the end, women have a direct voice to the Prime Minister. Along the way, Dwyer follows the highs and lows of the movement.

Unlike some docos, Brazen Hussies isn’t afraid to point out the movement’s flaws. High on the list is its failure to engage with Indigenous women; a situation that persists. The movement also missed the chance with LGBT+ women. While Dwyer frankly points out these misses, she also celebrates the hits – things like equal pay, reproductive rights and child care. We take them for granted now, but at one time, they simply didn’t exist.

If I have one quibble with Brazen Hussies, it’s that it doesn’t really put the movement into historical context. It devotes precious little time to the “first wave” of women’s rights activism – the struggle for women’s suffrage around the turn of the 20th Century. So the film starts out rather “cold”, as if the ’60s movement spontaneously sprang from nothing.

Dwyer interviews many prominent players in the movement, including Martha Ansara, Sue Jackson and Shirley Castley. But she cleverly avoids too many “talking heads” shots in favour of carefully curated historical footage. This lends immediacy and authenticity to the film.

For those who lived through those times, much in Brazen Hussies will be familiar. But for younger generations who’ve stood on the shoulders of giants, this insightful documentary should prove a real eye-opener.