Marie Curie is one of those people. Most of us have a vague idea about her, but her real genius remains elusive. Marjane Satrapi’s (Persepolis) handsome but slightly awkward Radioactive paints a fuller – if generally deferential – picture of the groundbreaking scientist.

Lauren Redniss provides the source material via her “visual non-fiction*” book, Radioactive: Marie & Pierre Curie, A Tale of Love and Fallout (2010). Jack Thorne (The Aeronauts) adapted the book for the screen. The resulting film tries to cram a full life, and a lot of ideas, into a compact 109 minutes. The script has some larger issues – a deal of clunky dialogue being high on the list. But Satrapi’s assured direction elevates the film beyond mere biography into something richer. 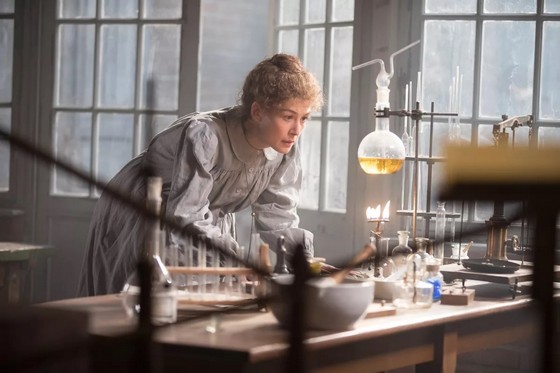 The film tells the story of Curie’s life in a pretty straightforward “quality British drama” kind of way. But in between segments of the life-story, Satrapi inter-cuts little segments illustrating the profound and long-lasting effects of Curie’s work. They include a 1950s father seeking cancer treatment for his son, two atomic bombings and the Chernobyl disaster. The film basically covers Curie’s life from 1893 (when she would have been 26) to her death in 1934. As you might expect, the film can only really hit the high points. And it plays a little loosely with the facts in service of heightened drama.

The film actually opens in 1934, when Curie (Rosamund Pike) collapses at her lab and is rushed to hospital. In flashback, she muses on the significant events in her life. They begin with her meeting the charming Pierre Curie (Sam Riley). He’s a scientist with connections in the right places. She is making great strides in her own scientific work, but her status as a woman – and a Polish immigrant – sees doors closed to her. She and Pierre begin collaborating on research into the curious properties of uranium. But their professional relationship soon turns personal as Marie and Pierre slowly fall in love.

Over the following years, Marie will have two daughters, isolate the element radium, and win (with Pierre) a Nobel Prize. But the couple are living with a killer. Neither Pierre nor Marie fully understand the effects of radiation exposure. Pierre grows sicker, unsure of the cause. And past trauma surrounding the death of her mother haunts Marie. So when Pierre dies in a carriage accident, her world is turned upside down.

Radioactive has a strange feel to it. Perhaps it’s because Satrapi shot the film in Budapest, standing in for fin de siecle Paris. The need to hide the more modern and definitely not French cityscape means lots of tight shots and interiors. This gives it something of a “television” feel. I also found the choice to film the story of France’s most celebrated scientist in English a little jarring.  Even so, Satrapi and DOP Anthony Dod Mantle (T2 Trainspotting) create some magical moments.

Rosamund Pike (A United Kingdom) pulls out all the stops as Marie. While perhaps not at the same level as her stunning performance in Gone Girl, she nimbly conveys the character’s many (sometimes contradictory) facets. Sam Reilly (Sometimes Always Never) is suitably debonair as Pierre, though the character never really breaks out of that mould. Aneurin Barnard (The Goldfinch) steps up later in the film as Marie’s colleague-turned-lover Paul Langevin.

While Radioactive can be a bit dry at times, Satrapi never lets it fall into dullness. Her inventive approach lifts the sometimes-dicey material. So while it’s not a home run, Radioactive delivers enough to make it worth the effort.

* So far as I can tell, a visual non-fiction book is the equivalent of a graphic novel, except (obviously) not fictional