Mouthpiece … it is the name of an artwork by Declan Swan (Jayden Popik in an impressive Queensland Theatre debut), but it also has multiple other meanings within Kieran Hurley’s very clever and often ironic award-winning play of the same name. 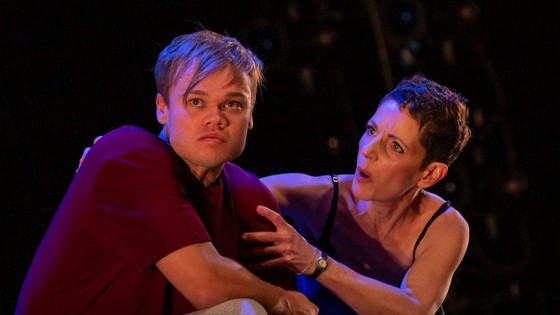 ‘I wanna live like common people, I wanna do whatever common people do’, Pulp’s lyrics cry out during the pre-show wait for Queensland Theatre’s return to the QPAC stage after an eight-month incubation. The represent a foreshadowing emphasis of the of the dynamic play’s plotline which sees middle-aged playwright Libby (Christen O’Leary) seeking a muse to rejuvenate her career. Appropriate to her profession, the work is meta from its start, in stage setup and dialogue as Libby reminds the audience of the connective, collective experience of theatre and starts upon deconstructing the progress of a play, lecture style. What follows from here is a moving, thought-provoking piece of theatre about storytelling, prompting questions around the appropriateness of re-appropriation, artistic responsibility and consideration of if we live stories or just lives.

A simple theme of security is evident from its opening scene which bursts forth with 17-year-old Declan seeing Libby on the edge of the cliff precipice of his safe place of retreat and saving her life. From there we see their initially uncomfortable friendship grow into a championing as Libby finds Declan to be a talented artist and seeks to be his advocate. Its unlikeliness suggests, for a moment, that this is a relationship that just might survive, however, soon their friendship finds itself distanced by the complications that come with the contrasting lives of a depressed, middle-class writer and a teenage boy who comes from the rougher part of town (think Ascot meets Logan, in its Brisbane context). And then Libby becomes creatively re-energised to be the voice of salvation in tell of teenage Declan’s story of poverty and abuse as her new play.

The provocative two-hander paces along under Lee Lewis’ nimble direction, but still allows occasion for us to sit within its big ideas. Most notable of these is an early extended monologue from O’Leary as Libby, reflecting about the career trajectory from being a challenging new voice to a no-longer-marketable artist. While it comes across as a socially rehearsed explanation of her journey back to living at home with her mother, glimpses of pathos soon pour out from within her mourn of the end of her career. All is not woeful, however, as rubbing up against its grim subject matter are some very funny moments, often courtesy of Declan’s brutally blunt and explicit observations. 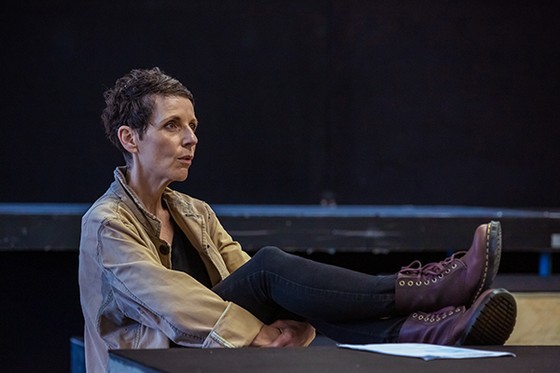 Renée Mulder’s minimal set design of black blocks to act as a variety of locations, supported by projections of key lines of dialogue and some stage directions, allows Popik and O’Leary’s grippingly authentic performances opportunity to impress. O’Leary’s presence onstage is undeniable, however, it is newcomer Popik who packs the biggest punch. He brings some wonderful light and shade to the role of Declan, who is tortured by anger but also vulnerable and loving. It is a bold and powerful performance.

Mouthpiece is a must-see piece of theatre. It is the probably the most meta show I have ever seen, especially as an opening night experience. More than just an exploration of the nature and notion of theatre, however, it is also a celebration of the shared emotion of its unique connective experience and, as such, is the perfect mouthpiece for its return to the common people.

Mouthpiece is playing at QPAC, Brisbane until 14 November 2020.