What do you do when you’ve got two great stories, but only one movie? Mash them together of course. And while this can be fraught, director Tom Harper (Wild Rose) masters the technique in The Aeronauts. Working from a script by Jack Thorne, he deftly melds two real-life stories into one cohesive narrative. The first story concerns the flight of James Glaisher who smashed the existing altitude record in 1862. The second is the life of Sophie Blanchard, a pioneering aviator who was Napoleon’s official “aeronaut”. To blend the two, the film places a fictionalised version of Blanchard in Glaisher’s balloon for the 1862 record attempt. 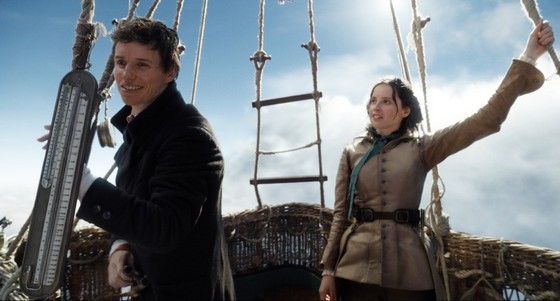 History buffs will likely scoff at this “re-writing” of Glaisher’s flight. But as I’ve observed before, this is narrative cinema, not documentary. The Aeronauts makes no claim of historical accuracy. It delivers a compelling story – which is really all anyone can ask. And it serves to illustrates (albeit obliquely) the role Blanchard and women like her played in early aviation.

Nerdy scientist James Glaisher (Eddie Redmayne) has a theory that by learning more about the atmosphere, humans can predict the weather. However, the stuffed-shirts at the Royal Academy in London scoff at the very notion. Without support or funding, Glaisher turns to Amelia Wren (Felicity Jones). She’s an “aeronaut” with the capacity to supply a balloon; but is struggling emotionally following the death of her husband in a ballooning accident. But they form a slightly uneasy alliance to stage a daring – and hopefully groundbreaking – flight. Wren is however a real performer who likes to put on a show for the crowd. She boldly announces to the assembled crowd that their balloon will go higher than any other has. Glaisher is more interested in his instruments than in Amelia’s theatrics. Once the flight is underway however, the pair experience the wonders of the air. But as the balloon ascends, the risks grow ever more perilous.

The engaging film has all the hallmarks of a “quality” British production. It boasts “name” stars, stunning production design, and fine period detail. Its manners are as genteel as a tea party, but it also serves up a really stunning action sequence. Many of the aerial scenes are obviously CGI-enhanced, but I barely noticed it after a while.

The Aeronauts is basically a two-hander. Jones and Redmayne dominate the film. Many scenes revolve around the two of them in the balloon’s basket. But Harper leavens the potential claustrophobia by intercutting scenes from both Glaisher’s and Wren’s pasts to explain what brought them to this point. Felicity Jones (On the Basis of Sex) is excellent as the daring Wren. She brings a fierce determination to the character, while also tapping into her more vulnerable side. Eddie Redmayne as Glaisher isn’t a long way from Newt Scamander from the Fantastic Beasts movies. But his understated performance fits the character well – and allows Jones to shine. Their dominance of the film leaves little room for other actors, but Phoebe Fox (as Wren’s sister Antonia) and Himesh Patel (as Glaisher’s assistant John Trew) make impressions.

If you want some quality British drama, The Aeronauts is a good bet. Although it takes a little while to lift off, once it does, it really soars.

The Aeronauts is streaming now on Amazon Prime