The Harry Potter franchise has been one of the most successful in movie history. Not content with having all the books adapted though, J. K. Rowling expanded the “universe” in 2016 with Fantastic Beasts and Where to Find Them. Now Rowling takes the series further with Fantastic Beasts: The Crimes of Grindelwald.

Rowling does the screenwriting here, and again enlists David Yates to direct. The result however is more filler than killer. Warner Bros have already announced there will be five Fantastic Beasts films in all, and The Crimes of Grindelwald is mostly just a link in that long chain. 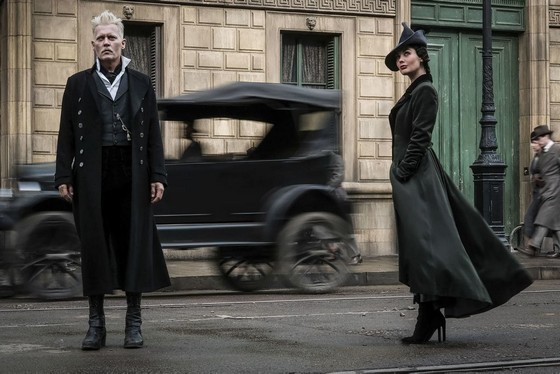 You might recall that at the end of the first movie, Colin Farrell’s Graves was exposed as none other than powerful wizard Gellert Grindelwald (Johnny Depp). This film starts out with Grindelwald – now in the custody of the American Magical Congress – being packed off to Europe to account for some unspecified crimes there. But Grindelwald has agents everywhere, and with a little help, soon escapes. Meanwhile Newt Scamander (Eddie Redmayne) is cooling his heels in London, having been banned from travelling after the events in New York. His mood however isn’t helped by uninvited guests Queenie Goldstein (Alison Sudol) and Jacob Kowalski (Dan Fogler) dropping by. At the insistence of his brother Theseus (Callum Turner), Newt pleads with the Ministry of Magic to lift the ban – to no avail. But when Newt discovers Tina (Katherine Waterston) is in Paris hunting Grindelwald for the Americans, he risks everything to find her.

The Crimes of Grindelwald lacks some of the critical elements that made the Harry Potter films so enjoyable. For a start, there’s a lot of talking. Yates and Rowling seem to have missed the “show, don’t tell” memo. The set pieces that punctuate all that dialogue are certainly splashy, but they mostly feel forced. But most importantly, it lacks fun. One of the highlights of the first Fantastic Beasts was the niffler’s rampage through New York’s jewellery stores. But that kind of whimsy is missing entirely here.

Its themes pick up on some from the Harry Potter series, particularly the divide between “pure-bloods” and others. Here, Grindelwald wants to make the “pure-bloods” a kind of “master race”, dominating both the magical and muggle worlds. But just in case you missed the obvious historical parallels of that, Yates bludgeons you over the head with them.

One other curious choice was to make Newt the apparent focus of the series, but then to sideline him almost entirely here. Much of the plot here involves Credence Barebone (Ezra Miller) and Leta Lestrange (Zoë Kravitz). And since that plot doesn’t really go anywhere by the end of the film, its inclusion is puzzling. Still, Rowling has promised that all will be revealed in later films, so maybe a little patience is needed.

Also, though this might be a bit pedantic, if you’re going to call a film The Crimes of Grindelwald, wouldn’t it help to tell us what those “crimes” are?

Eddie Redmayne (The Danish Girl) gives Newt a nervous shyness that sometimes seems at odds with the character’s actions. Ezra Miller (Suicide Squad) reprises his role as Credence and gets more screen time but his dour demeanour doesn’t help the film’s sombre mood. Zoë Kravitz (Rough Night) performs strongly in a dialogue-heavy role. Jude Law pops up as a young Dumbledore and at least brings his trademark charm to the character. Johnny Depp predictably chews the scenery as Grindelwald.

As noted, the Fantastic Beasts series is slated to consist of five films. In something that broad, The Crimes of Grindelwald undoubtedly serves a purpose in linking chapters and characters together. But its serious attitude and grinding plot make it a difficult proposition as a stand-alone film.

1 thought on “Fantastic Beasts: The Crimes of Grindelwald – movie review”