David Lowery is a hard director to pin down. His versatility means he’s equally at home in a bleak crime drama (Ain’t Them Bodies Saints), a supernatural love story (A Ghost Story) or a family-friendly adventure (Pete’s Dragon). Now he brings us The Old Man and the Gun, a kind of family-friendly crime drama and love story. 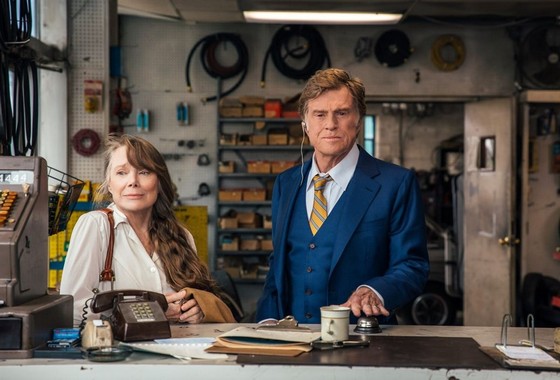 Much of the talk around The Old Man and the Gun has been about Robert Redford’s announcement that it’ll be his final acting role. While that’s certainly big news, it shouldn’t overshadow the film itself. This is another unique and engaging film from Lowery. It’s kind of remarkable for its delicacy and restraint. In other hands, it could have gone off the rails.

When we first meet Forrest Tucker (Redford), he’s just robbed a bank. In a very polite way mind you; but he’s robbed it nonetheless. After switching cars, he evades the cops by pulling up to help Jewel (Sissy Spacek), whose car has broken down. Over coffee later, Forrest is cagey about his “occupation”, but drops just enough hints and turns on just enough charm to have Jewel intrigued. The thing is that Forrest has recently broken out of jail and is on his way to meet up with his “associates”, Teddy (Danny Glover) and Waller (Tom Waits). Together they embark on a string of robberies that sees them dubbed the “Over-the-Hill Gang”. They’re never violent, always polite and respectful, which piques the interest of Texas police detective John Hunt (Casey Affleck).

The Old Man and the Gun is based on a true story. Reporter David Grann told Forrest’s tale in the New Yorker; and Lowery adapted it for the screen. And if this is indeed Redford’s last screen performance, it’s a very nice way to go out.

Tonally it sits somewhere between Ain’t Them Bodies Saints and Pete’s Dragon. Lowery doesn’t delve into the tropes of crime drama, preferring instead to forge a different path. As an example, despite the film’s title, I think the gun is only shown once. Its presence is implied in several scenes, but it’s not seen again. And it’s certainly never fired (thus disproving the Chekhov’s gun “rule”). Lowery gives his characters and his film room to breathe. Neatly constructed action sequences are spaced out with quieter, more contemplative moments. And the montage of Forrest’s numerous escapes is nothing short of genius.

Redford seems completely at home as Forrest. You can kind of imagine this guy is what the Sundance Kid would have been like if he made it out of Bolivia and lived to be 80. Redford’s cheery charm is infectious, but his gravitas ensures the character never veers into parody. Sissy Spacek too is beautifully understated as Jewel. Casey Affleck brings a different energy to the film as the rather harried Hunt. And it’s fantastic to see Danny Glover and Tom Waits back on screen; and both are terrific as Forrest’s accomplices.

A crime story with no shoot-outs and no explosions (there are car chases though) might be anathema to some audiences. But The Old Man and the Gun is well worth your time. This is a lyrical and wonderfully acted film that will stay with you.