Terrence’s Malick’s The Tree of Life won the Palme d’Or at Cannes, but it drove me batty because I could not make head nor tail of it. So too David Lowery’s (Ain’t Them Bodies Saints) A Ghost Story, which I only understood in the most rudimentary way. 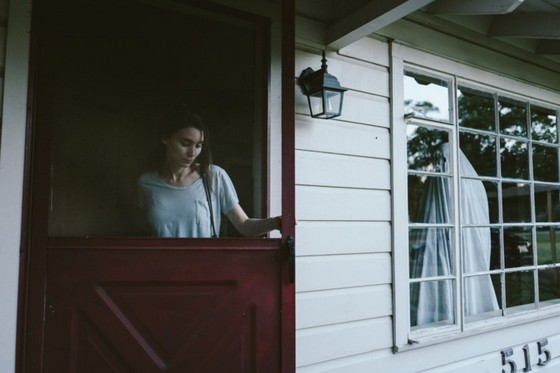 It concerns an official ghost. You know the ones, wearing white sheets with the eyes cut out – I kid you not. He’s desperate to stay with the partner he had before he passed on. He cuts a sad and tragic figure and I dare say that is the director’s point.

Lowery’s fourth feature is steeped in myth and fantasy. It’s a film that explores our universal need for love and connection — even after death.

A Ghost Story opens in a faded suburban ranch house, where a young couple, identified only by their initials C and M, share a quietly restless life. C (Casey Affleck) longs to make music and stay close to home. M (Rooney Mara) however dreams of moving elsewhere, creating a subtle tension that remains largely unspoken. Suddenly, C is killed in a car accident at the end of their driveway. M travels to the morgue to identify his body, which lies disturbingly still on a slab beneath a crisp white sheet.

M departs in grief. And moments later, so does C – still wearing his sheet like a child’s vision of a classic ghost with brooding black eye holes and a lonesome, billowing gait. Days, weeks, and even years pass as C haunts the house where he lived, loved and made music alongside his partner and muse – seemingly stuck.

My number one movie rule is a very simple one – you should be able to enter a cinema and “get” the film without reading or hearing anything about it beforehand. By that measure, A Ghost Story fails. It is far too obscure and esoteric.

The story isn’t linear and so, given the obtuse nature of the material presented, is downright confusing. Large tracts come without dialogue or with just a musical bed. The camera is often left lingering on a scene for no appreciable reason. It is up to us to interpret what is going down and frequently that is far from easy to decipher. Bewilderment is a constant bedfellow.

The words “artistic” and “claptrap” spring to mind. A film with low audience appeal, A Ghost Story is hard work and scores a 3 out of 10.