Brad Furman knows his way around a legal drama. After all, he directed the much-admired The Lincoln Lawyer (2011) with Matthew McConaughey. But he bites off a bit more than he can chew with City of Lies, a fact-based drama about high-profile murder and police corruption. 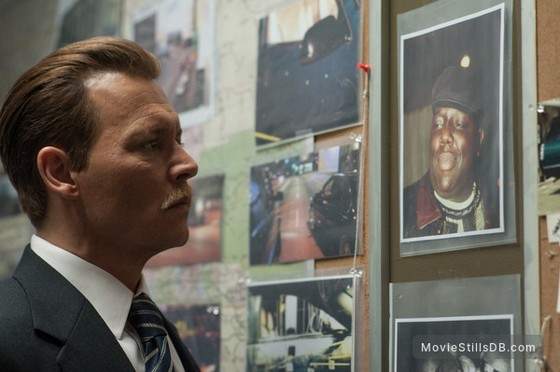 This mostly well-made film concerns the 1997 murder of rapper Notorious B.I.G. (a.k.a. Christopher Wallace) in Los Angeles. It follows the investigation of Detective Russell Poole, and the web of corruption he sought to expose. How much of it is credible is, I guess, up to the audience to decide; since the real-life case remains officially unsolved. I personally query some of the film’s bolder claims. But in digging into Russell’s labyrinthine investigation, Furman ultimately loses control of the material. So while the first half of the movie is terrific, it unravels significantly later.

The film opens with former detective Poole (Johnny Depp) living alone in LA. His apartment has been turned into an investigation room, with evidence tacked up around the walls. Journalist Jack Jackson (Forest Whitaker) tracks Poole down, hoping to right some wrongs of his own. Jackson wrote an award-winning piece on the case back in the day, but has been asked to do a follow-up 20 years later (which would presumably set the film in 2017, when it was initially shot).

Gradually, through a series of flashbacks, Poole walks Jackson through the crime, the allegedly related murder of Tupac Shakur in 1996, and a sophisticated criminal network operated by crooked cops from within the LAPD. He relates his time working the case with Detective Fred Miller (Toby Huss) and his pursuit of unwelcome lines of inquiry. Jackson meanwhile starts his own digging, which leads him to Poole’s own chequered past.

When Furman sticks to the core of the story – Biggie’s murder – the film hums along. But when Christian Contreras’s script (based on Randall Sullivan’s non-fiction book) devolves into family dramas and conspiracy theories, it rather falls apart. The film’s attempts to explore issues of race and violence skim the surface rather than diving in.

Johnny Depp (Fantastic Beasts: The Crimes of Grindelwald) is perhaps an odd choice as Poole. Maybe it’s me, but I didn’t get either the tenacity or the world-weariness the script tried to infuse in the character. That said, he still manages to “carry” the film along some of its rough patches. Forest Whitaker (Black Panther) also struggles in an under-written role as the fictional Jackson. Toby Huss (Destroyer) however is far more convincing as the no-nonsense Miller.

City of Lies is a clumsy film, from its awkward title to some woefully ill-considered scenes. Furman doesn’t really bring an editorial eye to the material, resulting in some serious problems in the back end. Still, if you’re interested in unsolved crimes or police corruption, this could be for you.