Vincent River is not a location; it is the name of the character at the centre of Philip Ridley’s powerful 2000 one act play of the same name that addresses homophobic-based violence, which can really be extended to include violence against any form of difference. However, even with this knowledge, Vincent’s character remains elusive as, despite dominating discussions, we never see him on stage. Instead, we begin with 53-year-old London East-Ender Anita (Amanda McErlean) being visited by 17-year-old Davey (Patrick Shearer), a stranger who has been following her. 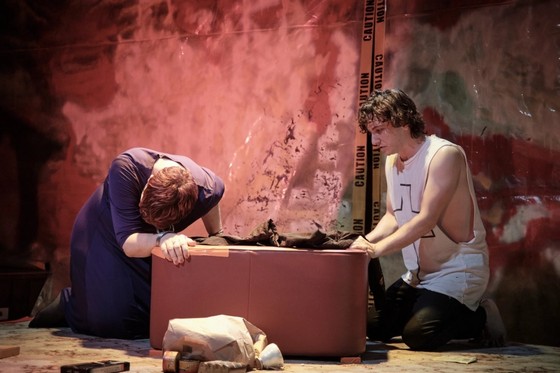 It has only been months since Anita lost her son Vincent in a brutal hate crime and although she is clearly a strong woman, she is emotionally desperate for every, even gruesome, detail from the stranger who found the corpse of her murdered son and now wants to know more details about his life. As information is guarded and then shared, the duo drink and banter through their searches for an end their pains, for Davey has also suffered loss on a scale greater than we at first realise. All is revealed as their shared story navigates its way through accusations and insults, revelations, yearning for love and a reprieving resolution of sorts.

On paper, a 90-minute two-hander of this nature can seem like an arduous undertaking, however, incredible performances mean that experience of the engrossing tale flies by despite its narrative smoulder. Indeed, Michael Beh’s evocative direction allows McErlean and Shearer to give their all as performers meaning that the story is told magnetically, in reaction to each other as much as through their own dialogue delivery. Never off-stage, McErlean takes Anita through the full gamut of emotions during the play, convincingly conveying the grief, disorientation and guilt of a mother who has lost her only son in the most unthinkably violent of circumstances, leaving her with only contemplation of lost opportunities. Then with his slick jacket removal, things switch to Davey’s complexities and the real reason for his visit. The remainder of the show seems almost like an extended monologue from him and, in Shearer’s hands, we hang on his every moment of bravado and ultimate vulnerability. There is a natural cadence to his dialogue delivery that makes him a captivating storyteller despite the disturbance of his recall of the critical incident.

Ridley’s clever writing also serves to elevate the work. While the script of Vincent River is dense, it is full of natural dialogue and well-placed moments of silence. It is a tense and turbulent drama in its portrayal of its deep and confronting themes of hate crime, homophobia and grief, but this is considerately tempered by some tender moments and flashes of humour to ease the strain. Craftedness is seen in its revisited motifs that are not overdone in their inclusion. Similarly, too, this production’s dynamic soundscape, including of well-placed song snippets, is not overdone. Bethany Scott’s evocative lighting design and shadows are used to effect for emphasis, though transitions are occasionally abrupt. And the contrast of Michael Beh’s set design of a dingy apartment against a vibrant backdrop, is impressive, especially in such an intimate venue as Milton’s Christ Church. 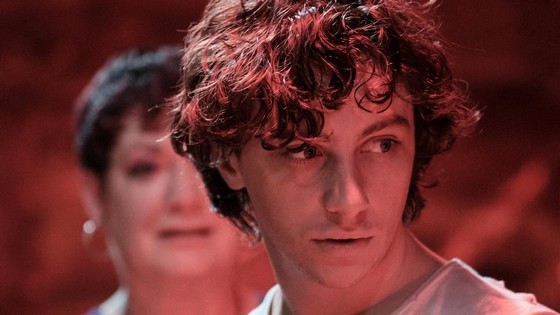 Vincent River is gripping theatre. Its execution is almost claustrophobically taut, meaning that its experience is emotionally harrowing, in the way that good stories often are. The fact that it comes with important messages around marginalisation makes it another perfect choice for The Curators and an absolute treat for theatre-starved audiences.

Vincent River is showing at Christ Church, Milton in Brisbane from  13 – 31 October 2020