Marvel Studios’ latest superhero flick, Black Panther, tells the tale of T’Challa, an African prince who takes on the mantle of king and the centuries’ old legacy that comes with it. Crossing racial and cultural lines, the groundbreaking Black Panther character is another creation of Stan Lee and Jack Kirby. He made his first appearance in the comic “Fantastic Four Vol. 1” Issue 52, published in 1966 (at the same time as the Black Panther political movement was gaining traction in the US). 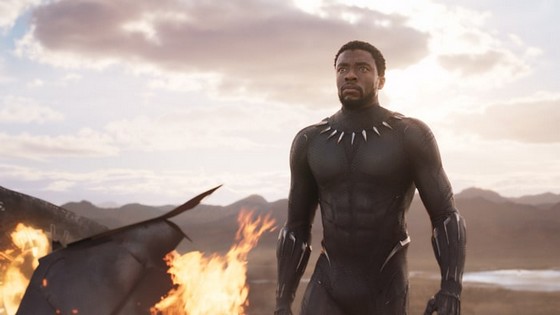 In 2016, the Marvel Cinematic Universe welcomed Black Panther and introduced him to audiences in Captain America: Civil War. Now the studio has fleshed out his story.

After the death of his father, T’Challa returns home to his isolated African nation to take his rightful place as ruler. That nation is Wakanda, a land shrouded in secrecy for centuries. Beneath its veil however we find a highly-advanced nation that surpasses anything else on the planet. But when a powerful enemy appears in the form of Killmonger (Michael B. Jordan), T’Challa’s mettle will be tested. He’s drawn into a formidable conflict that puts the fate of Wakanda – and the entire world – at risk.

The mood of the picture gravitates from earnest to playful. While some of it was most predictable, there were a number of surprises. I found the longer it went, the more invested I became. This is surely is a good thing for a movie that spans 2 hours 14 minutes.

I knew nothing of the comic, so I could form an opinion on the content without comparing it to the source material. Overall, my impressions were favourable.

The cast includes a number of familiar names and some lesser lights. Chadwick Boseman (Gods of Egypt) has impact in the lead as the principled king with heart. Lupita Nyong’o (12 Years A Slave) is earnest and sincere as his love interest – and kick-ass Wakandan spy – Nakia. Michael B. Jordan (Creed) gives Killmonger a muscular presence with a dangerous edge. Andy Serkis (War for the Planet of the Apes) makes for a roguish bad guy as smuggler Klaue; and clearly has a heap of fun with his role.

Do remember to stay on until all the credits have rolled through as there’s a pointer to the future of this franchise.