Let me start in a cheeky and derogatory tone. Let’s take Jack Sparrow, promote him to be an eloquent university professor teaching literature and tell him that he’s terminally ill. If you watch the movie The Professor (the original movie title was  ‘Richard Says Goodbye‘) with a dismissive attitude, you could utter such a statement. 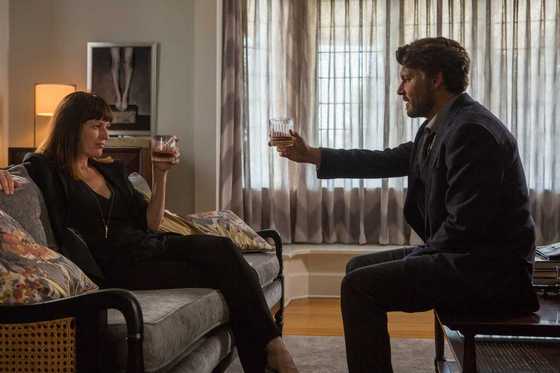 Johnny Depp may have the tendency to use the ever-drunk pirate character. But otherwise, this entertaining tragicomedy doesn’t have much in common or many similarities with the Caribbean pirate spectacle. Even if the film is steeped with dark humor, a deeply tragic subject can still be discovered. A message about acceptance and an attitude of resignation. Though, Richard’s way of acceptance and resignation can be called very rigorous.

Instead of a tough treatment against the proliferating ailment, Richard decides to let things carry on as they are and completely change the course of his life (the subtle Sparrow-references come to mind spontaneously). That means enjoying life to the full. In short, exploiting the saying “Carpe Diem” in an extreme way. Richard gets dead drunk continuously, smokes pot on a regular basis and ventures into unabashed free sex. In fact, with both sexes and with the approval of his wife who confessed she’s having an affair with Richard’s boss. So you can say that the bad news told by his doctor, caused a groundbreaking turn in his personal life. For the bystanders, however, it seems as if he has become completely insane.

This is without a doubt one of the most successful interpretations of Depp in years. Here this energetic actor shows he can act for sure. I fully understand that he was given this part. The rebellious character of the egocentric figure Richard fits effortlessly with a figure like Johnny Depp. Perhaps his personal private situation provided the appropriate state of mind to play this indifferent intellectualist. His sarcastic view on life produces amusing scenes. The recklessness with which he plunges into adventures, causes others to frown. As a viewer, you understand this turnaround much better. As a result, Richard finds himself in some fairly bizarre situations in which his wife Veronica (Rosemarie DeWitt), daughter Olivia (Odessa Young) and best friend Peter (Danny Huston) are involved. By the way, I didn’t think the acting performance of these last actors was that bad either. Apart from the theatrical drama of Danny Huston.

The Professor probably won’t appeal to a younger audience. It’s not really a movie that will make you happy. I guess it applies to all films that deal with this terrible disease. Yet The Professor succeeded in transforming this tragic fact into something humorous. That the end would become more emotional (you could use the expression corny as well) was of course inevitable. Serious films where you are confronted with the concepts of finiteness and death clearly does something with a person. It makes you think about the meaning of life and what you have achieved. And I agree that as I grow older my thoughts sometimes drift away into that area.

After seeing this film, I think I will drastically revise my opinion and also take a “Je mon fou” attitude like Richard. So I can fully enjoy everything in the time that’s left. That seems a more pleasant way to end my earthly journey.