The film’s subtitle A Year on the Frontline of Australian Environmental Activism tells you all you need to know about this documentary from veteran filmmaker Sally Ingleton. Wild Things traces the history of environmental activism in Australia from the fight to save the Franklin River from being dammed to the current fight to stop the Adani coal mine in Queensland. Archival footage of some of the earliest historical campaigns gives context to the current struggles to address climate change. 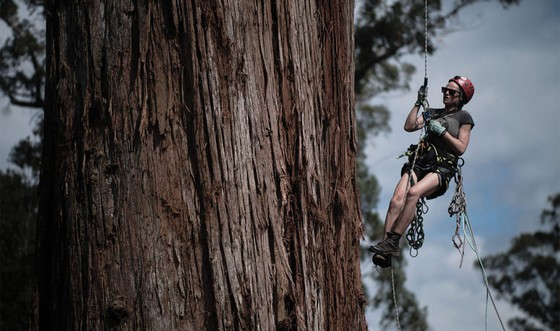 A good deal of the film follows teenage activist Harriet O’Shea Carre, the fifteen-year-old schoolgirl from Castlemaine who was largely responsible for organising the student strike and protests to heighten awareness of the government’s inaction on addressing the urgent need for action on climate change. Her actions bring a rebuke from Prime Minister Scott Morrison who says that there should be less activism in schools. But Ingleton clearly believes that young people like Carre are future leaders in the environmental arena, alongside the likes of Greta Thurnberg, in a growing army of eco activists.

Ingleton also spends some time at the camp set up in Queensland where grandmothers and other concerned activists gather to peacefully protest the attempts of Adani to develop a coal mine. And she also follows the efforts of Dr Lisa Searle, who is actively trying to prevent logging of Tasmania’s pristine wilderness and the Tarkine wilderness.

In a series of interviews, many activists express their concerns for the future of the planet. Archival footage is juxtaposed with handheld and smartphone footage taken on the ground at many of these protests that lend an urgency to the material. Ingleton and editor Steven Robinson deftly weave the various strands together for a compelling picture of the realities of climate change and the dangers of continued inaction. The documentary has been beautifully filmed and showcases the natural beauty of these areas that are under threat from development.

However, I got the feeling that Ingleton is preaching to the converted.