Our Town, 1938 Thorton Wilder’s Pulitzer Prize-winning ode to small-town American life, requires only minimal production values, with the playwright calling for no curtain, no scenery, and an empty stage in half-light.

The play ignores most dramatic conventions. It is set in the actual theatre where it is being performed, but the year is, as always, May 7, 1901. The Stage Manager of the May 7, 1901 production introduces the play within-the-play which is set in a fictional community. From the darkness of its startling full blackout beginning, it is a slow start as charismatic Stage Manager narrator (an affable Jimi Bani) breaks the fourth wall to connect with and introduce the audience to the residents of the small New Hampshire Anywhere USA town. 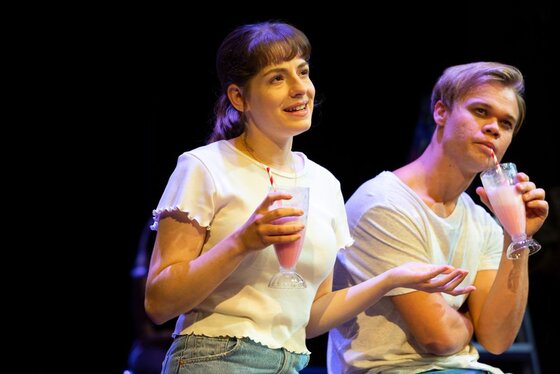 The story is about two families, the Gibbs and the Webbs, living next door to each other in a country town. The time capsule play is clearly of its era. Women spend their days cooking, cleaning, washing and watching over their children as the men go off to work. Boys play sports and girls seem more studious.

What follows over the next almost three-hour duration (including two intervals) is the creation of an engaging world. Experience of Act One, in particular, is akin to watching a radio play unfold. Inventive sound effects add to the cleverness of its realisation. Nathalie Ryner’s versatile costume design assist in the change of scenes sans staging.

Our Town is certainly unusual when it comes to structure. Not only does it contain a number of flashbacks and flash-forwards, but it includes little action because nothing exciting ever really happens in Grover’s Corners, which is exactly its point. At times we see characters like Mrs Gibbs (Libby Munro) and Mrs Webb (Amy Lehpamer) simultaneous undertaking domestic activity alongside each other, emphasising the sameness of their every day experiences. As the production continues, it not only embraces details like this, found in the simplest, most every day occurrences, but it finds the funny in these fragments of life, which adds to its appeal. 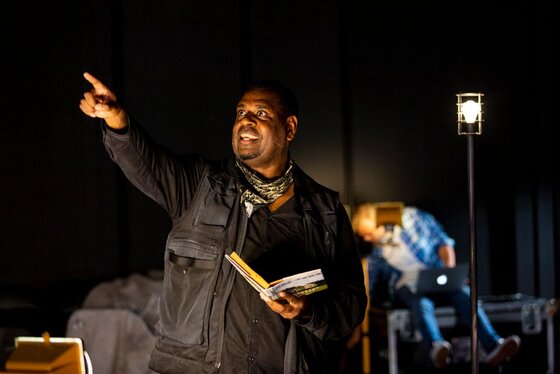 Act One begins in 1901 and sets about conveying the beauty of everyday life. Professor Willard (Andrew Buchanan) speaks to the audience about the history of the town. The milk and paper are being delivered over trivial conversations about the weather as the Webb and Gibbs households send their children to school. It is quiet story, patient in its simplicity.

As the town settles under a bright moon, we move to Act Two (set three years later) and its focus on Love and Marriage. Then, finally, we get a moving third act, titled Death and Eternity. It focuses on mankind’s failure to appreciate the beauty of existence.

The actors are uniformly fine. As the story proceeds it becomes apparent that the story of Act One neighbours and school friends George Gibbs (Jayden Popkin) and Emily Webb (Lucy Heathcote) is at its core. It is appropriate, therefore, that the duo deliver the most noteworthy performances.

The show notably also features four talented actors from Queensland Theatre’s Young Artists’ Ensemble, who make their main stage debut. While the energy of these performers (Angus Freer, Mia Foley, Luca Klarwein and Ava Ryan) adds to the on-stage dynamic, it is ultimately anchored by its who’s who cast of more seasoned performers. In particular, Roxanne McDonald gets laughs before even opening her mouth as the town’s young paperboy Joe. Later, she infectiously shares her love of love as gossipy chorister Mrs Soames as the town gathers for George and Emily’s wedding. 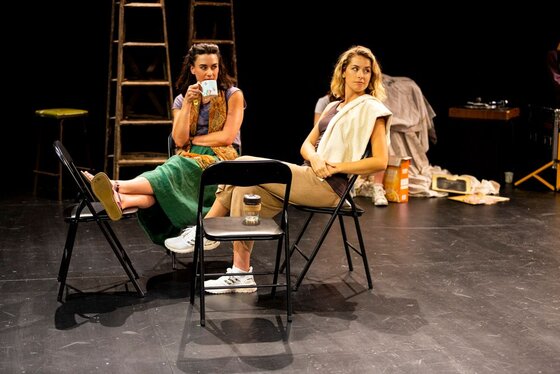 Our Town may be set in America, but it not just about life in that country or of the time of its setting. Rather, it is about little moments that can become big moments of everybody’s lives.