A little late for Halloween maybe, but Freaky will definitely scratch that comedy-horror itch. Co-writer and director Christopher Landon builds on the success of his Happy Death Day films with this enjoyable romp – even if he doesn’t really bring anything new to the table. 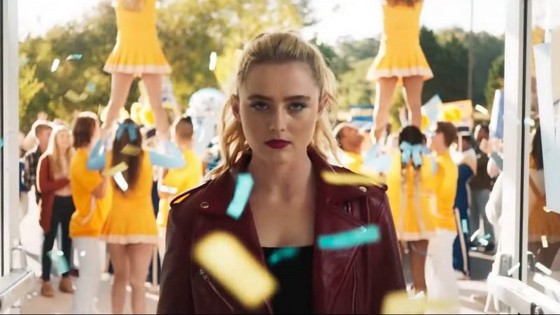 While the Happy Death Day series riffed on Groundhog Day, Freaky riffs on body-swap comedies, notably Freaky Friday (as the title suggests). This is another Blumhouse production, and you might have noticed a split in the company’s output. While horror remains its focus, Blumhouse increasingly divides its efforts between serious psychological like Get Out, and more comedic fare. This film certainly falls on the comedic side.

A serial killer known as The Butcher (Vince Vaughn) is terrorising the small down of Blissfield. In a gory opening, The Butcher massacres four teens to get his hands on a supposedly cursed dagger. Meanwhile, mousy high-schooler Millie (Kathryn Newton) is getting ready for the school’s homecoming celebrations. She’s not all that popular, and spends most of her time with besties Josh (Misha Osherovich) and Nyla (Celeste O’Connor). Millie plays the mascot for the school’s football team, which involves dancing around in an oversized beaver costume. After the game, Millie patiently waits for her mother Paula (Katie Finnerman), but she’s a no-show.

Sitting in the dark, Millie soon senses an evil presence. The Butcher is stalking her. She tries to get away, but the killer tracks her down and tackles her on the football field. He stabs her in the shoulder with the mythic blade, but immediately suffers the same injury. Just at that moment, Millie’s sister Ginny (Kelly Lamor Wilson) – who’s a cop – arrives on the scene and frightens The Butcher off. Shaken, Millie returns home and goes to bed. But the next morning, she wakes up in The Butcher’s body. And worse, he’s in hers.

Most of the laughs in Freaky come from watching the hulking Vince Vaughn act like a schoolgirl. The recent Jumanji movies employ basically the same concept, so it doesn’t feel very original. Also, the script by Landon and Michael Kennedy (Bordertown) has holes you could drive a truck through (though props to the guys for coining the term “murder Barbie”). But for all that, Landon keeps things light and snappy. I barely noticed the film’s 101 minutes running time. Landon deftly plays most of the horror for comic effect. And while the outcome is never in doubt, he injects genuine tension into the climactic scenes.

Vince Vaughn (Seberg), as you might expect, revels in the dual roles of The Butcher and Millie-as-The-Butcher. And he nails both. Kathryn Newton (Pokemon Detective Pikachu) equally seems to have fun in the counterpart roles. Misha Osherovich (The Goldfinch) and Celeste O’Connor (Wetlands) lend solid support as Millie’s pals, though Uriah Shelton (13 Reasons Why) blends into the background a little as Millie’s love interest Booker.

If you like your horror not too horrific (like me), then Freaky should be right up your alley.