Who would have thought that one of the more perceptive observations on race in America would come via a comedy-horror movie? And while Get Out is a world away from well-meaning documentaries on the same topic, it probably has more to say and does so more deftly.

Get Out is the brainchild of Jordan Peele, who has both written and directed the film. If his name isn’t all that familiar, you may know him as one half of comedy duo Key and Peele (with longtime collaborator Keegan-Michael Key). What Peele has produced is a supremely entertaining horror movie, blended with sharp observational comedy. 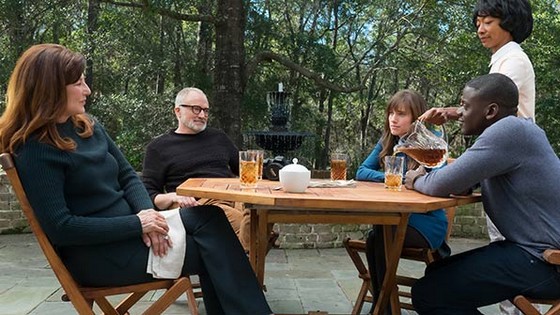 Photographer Chris Washington (Daniel Kaluuya) is madly in love with girlfriend Rose Armtiage (Allison Williams); so it’s only natural that when she asks him to come home with her to meet her parents, he agrees – although not without some reluctance. He’s concerned Rose’s parents don’t know he’s black. But she laughs it off, and so the couple set out for the trip from the city to the Armitage family’s country estate. When they arrive, Rose’s father Dean (Bradley Whitford) and mother Missy (Catherine Keener) couldn’t be nicer to Chris, and he’s reassured they’re accepting of his relationship with their daughter. But something isn’t quite right about the situation. Apart from the fact that the only other African-Americans seem to be servants – gardener Walter (Marcus Henderson) and housekeeper Georgina (Betty Gabriel) – their behaviour is, well, off. But things will take a darker turn at dinner.

What makes Get Out so appealing is the acuity of Peele’s script. This is a screenplay that Robert McKee himself would be proud of. Peele cleverly leads us through the world of these characters, carefully leaving a trail of crumbs along the way. You need to pay attention to these crumbs, because they are all brought back into focus by the end of the film. It’s the first rule of scriptwriting – pay off what you set up – and Peele really delivers.

There’s a lot going on thematically in this film too; although to discuss that too much would give away too many spoilers. Suffice to say that many tropes of the horror genre are skilfully subverted (although one normally associated with film noir is resolutely not). And if you’re not a fan of the horror genre (which, I confess, I’m also not) don’t be too worried. The horror elements of the film are pretty much kept to a minimum. The tension is mainly psychological and there’s not a huge amount of gore, other than in the film’s brutally comedic climax.

English actor Daniel Kaluuya (Sicario) is excellent in the lead role as Chris. He conveys both the character’s likeability and his resourcefulness in a performance that’s sure to have producers knocking on his door. Allison Williams (Girls) steps away from her TV persona with assurance as Rose. Bradley Whitford (Saving Mr Banks) and Catherine Keener (Captain Phillips) are fine as the shady parents; but the film is made by two supporting performances – Betty Gabriel as the creepy Georgina and Lil Rel Hawley as Chris’s best friend and TSA agent, Rod Williams.

Get Out may just be one of those rare films that works equally well as both a genre film and one that transcends its genre, if that makes sense. Whether you want to enjoy it as comedy, thriller or social commentary, it has something for just about everyone. Just make sure you pay attention.