When my kids were younger, they loved Pokémon. They’ve now outgrown that phase but the undeniably cute characters remain with them – and me I guess. I can’t say I was ever a huge fan, but they were a social phenomenon for a while there. The Pokémon wave however crested some time ago, so the release of Pokémon Detective Pikachu seems, well, oddly timed. 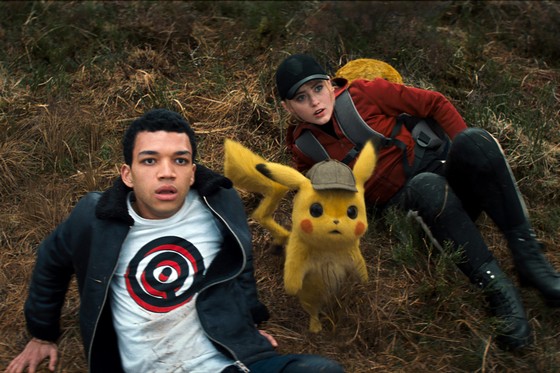 This bizarre little movie aims unashamedly for 5 – 13 year-olds and judging by the reaction at the preview screening, they’ve hit that demographic hard. It has all the things kids want – cute characters, lots of action and a completely bonkers storyline.

As the title suggests, the plot is a kind of detective story. In it, Tim Goodman (Justice Smith) tries to find what happened to his father, who has apparently died in a car crash. That requires him to leave his job as an insurance assessor* (yes, really) and travel to Ryme City. Upending traditional Pokémon lore, the city’s founder, Howard Clifford (Bill Nighy), bans battles in Ryme City. Humans and Pokémon co-exist; with each human having a Pokémon companion.

When he gets to Ryme City, Tim discovers the police – represented by Lt Yoshida (Ken Watanabe) – are writing it off as an accident. But while tidying up his father’s affairs, Tim encounters his father’s Pokémon partner Pikachu (voiced by Ryan Reynolds). By chance, Tim can understand Pikachu. Soon the coffee-swilling, smart-talking Pikachu has Tim convinced there’s something more to the car accident than meets the eye. And while Tim stays reluctantly at first, his reluctance washes away when he meets media intern Lucy Stevens (Kathryn Newton), who’s keen to sniff out a big story.

While the film alludes to classic detective stories, they’re soon forgotten. A tide of increasingly bizarre twists, culminates in an off-the-wall battle above Ryme City. Any tension the story might build up dissipates as one Pokémon-filled scene after another hogs the screen. However, in the middle of the film, director Rob Letterman (Goosebumps) pulls off a genuinely spectacular scene. That should provide at least some compensation for adults dragged along to this film.

Bizarrely, this American take on a Japanese phenomenon was mostly filmed in the UK (of course). London provides the backbone for the CGI-enhanced Ryme City. But even more bizarrely, it kind of works.

Letterman directs from a script crafted by a committee led by Dan Hernandez (The Tick) and it shows. The plot is a jumbled mess, the bad guy is obvious and the twists are pretty lame. Plus the acting is… well, perhaps “stagy” is the best word (Bill Nighy though towers over everyone else as Clifford). And the thing is, none of the kids cared about any of that.

Pokémon Detective Pikachu has a built-in audience that, I’m sure, will be determined to see this film. And good on them. Movies are meant to be fun, and kids are bound to have fun with this.

* Possibly an allusion to Double Indemnity, but who knows.