Recently we’ve had a number of female-centric remakes of films with the likes of Ghostbusters, Ocean’s 8 and the atrocious What Men Want hitting cinemas, all of which were vastly inferior to the original. Now we get this female centric remake of Dirty Rotten Scoundrels, the hilarious 1988 comedy that teamed Michael Caine and Steve Martin as a pair of conmen plying their trade in the French Riviera. That film itself was remake of the 1964 comedy Bedtime Story, which starred Marlon Brando, David Niven and Shirley Jones.

This is a lazy, unnecessary scene-by-scene remake that reverses the gender roles of the characters. Screenwriter Jac Schaeffer has basically updated the original 1964 script from Stanley Shapiro and Paul Henning (who incidentally created the popular 60s TV series The Beverly Hillbillies), which Dale Launer (Ruthless People) effectively reworked in 1988. Schaeffer has tweaked a few scenes, added a couple of gross out gags and allowed for modern technology with the internet and facebook, but basically this is only a moderately amusing comedy. 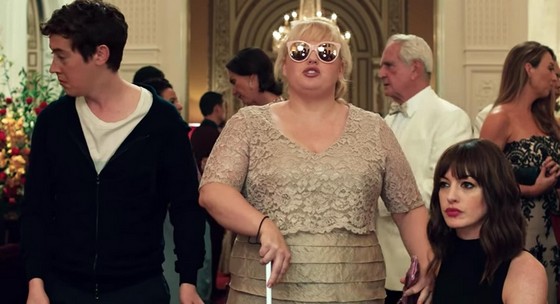 Josephine Chesterfield (Anne Hathaway) is a high class con artist plying her trade in the picturesque coastal resort of Beaumont Sur Mer in the south of France, a playground for the rich and entitled. Josephine is adept at setting up elaborate scams to deprive gullible older rich men of their valuables and money. She has a couple of faithful retainers, including the local police chief and her butler Albert (Nicholas Woodeson) to help with her schemes.

But then she encounters Penny Rust (Rebel Wilson), a gormless hustler who is like a bull in the china shop with her approach to scamming men. Penny is content with earning small change from her male targets and has little ambition. She has come to France for a change of scenery and to escape the long arm of the law back in England. When they first meet on a train Josephine tries to convince Penny that the pickings are more lucrative elsewhere. But when Penny sticks around threatening Josephine’s territory, Josephine tries to educate her in the finer arts of the con.

A turf war erupts which will be decided on the outcome of a bet. Whoever is first to score $500,000 from the nerdy and gullible twenty-something software tycoon Thomas (Alex Sharp) gets to stay and the loser has to leave town. The games begin, but the rivalry and one-upmanship between the two women is nowhere near as funny or engaging as the antics of Martin and Caine thirty years earlier. Josephine pretends to be blind to play on Thomas’ sympathies, while Josephine pretends to be a world-famous eye doctor who can heal Penny’s affliction. But none of this comes close to matching the brilliantly hilarious scene in which Caine whips the wheelchair bound Martin, trying to make him walk, which still stands up today.

This remake has been directed by former stand up comic and actor Chris Addison who makes his feature film directorial debut here after directing several episodes of TV series like Veep. But his handling of the material is too tentative, and he lacks the flair and feel for comedy that Frank Oz brought to the material. His inclusion of a couple of gross-out moments adds little to the film.

Hathaway and Wilson try their hardest to inject some life into this dull affair. For her part Hathaway is charming and elegant and seems to enjoy this opportunity to play light comedy. She also gets to wear some gorgeous gowns and try out a plummy British accent. Wilson though has all the subtlety of a sledgehammer. She seems to be merely reprising her limited bag of tricks from other movies; most of the humour revolves around her appearance, which has worn a little thin after three Pitch Perfect films. Her shtick has grown tired and grating and she is a largely toxic presence in comedies. But she does seem more than willing to throw herself into the physical comedy and take a few pratfalls for her art. Her antic doe elicit a couple of chuckles. Sharp (who won a Tony award for his performance in the Broadway production of The Curious Incident of the Dog in the Night-time) is good in what is essentially an underwritten role.

There’s a curious coda to the film that makes little sense given the relative abilities of the three main characters.

The only surprise here for audiences familiar with the original is just how flat and dull the material seems the third time around.