Now graduated from college, the Bellas are out in the real world in Pitch Perfect 3. They soon find it takes more than a cappella to get by. This is the final in the lightweight Pitch Perfect series that has already taken more than half a billion dollars at the global box office. 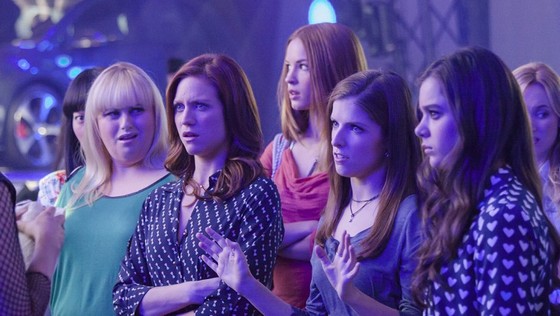 After the highs of winning the World Championships, the Bellas find themselves split apart. They also discover there aren’t many job prospects for making music with your mouth. Their lives since have been humdrum at best. So when they get a chance to reunite for an overseas tour entertaining US troops, this group of awesome nerds decides to go for it. More music and questionable decisions abound.

All the old favourites – Anna Kendrick, Rebel Wilson, Hailee Steinfeld, Brittany Snow, Anna Camp, Hana Mae Lee and Alexis Knapp – return. Romance blossoms in triplicate in this edition, in which a couple of the Bellas are having daddy issues.  The material has a comfortably familiar feel, but fortunately the plot isn’t just regurgitated from the previous two.

Writer Kay Cannon has remained a constant in the series since it kicked off in 2012. On this occasion, she shares credit with Mike White (School of Rock). Each film has however had a different director; here it’s Trish Sie, who most recently directed the fifth instalment of the Step Up series.

There’s a lot to like about the third coming of the Bellas. Ten of them strut their stuff in this one, with an eleventh staying home to give birth. It’s rich, colourful and dynamic, with some great tunes along the way. Above all though, it’s fun. Rebel Wilson (playing Fat Amy) again steals the show with her one-liners.John Michael Higgins, too, continues to entertain with his inglorious asides as part of the crew documenting the Bellas’ latest venture, alongside Elizabeth Banks.

Ruby Rose – looking a million dollars – puts in an appearance as the lead singer of a rival group. And a plummy-voiced John Lithgow plays the villain of the piece, as Fat Amy’s criminal father.

I walked away from Pitch Perfect 3 feeling good. And that, to me, is the ultimate test of froth and bubble like this.